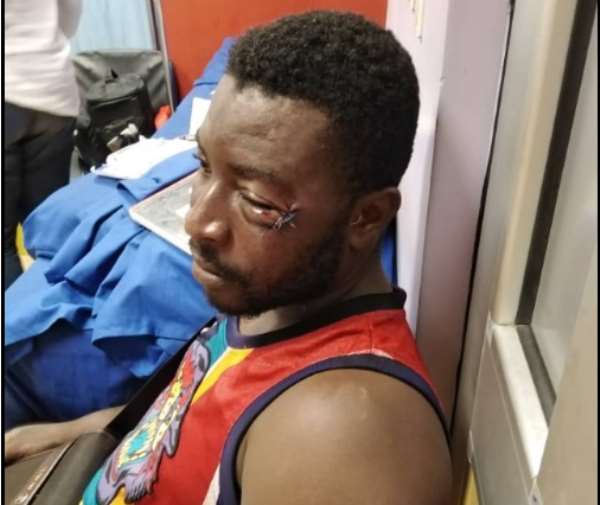 An assaulted football fan who has been identified as Michael Siaw has break his silence following the barbaric incident at the Accra Sports Stadium on Sunday.

According to him, he did nothing provocative.
The incident happened during the clash between Hearts of Oak and Asante Kotoko.

In the video circulating on social media, the boxer is seen delivering three quick stiff jabs to the face of the fan.

According to him, he was just celebrating when his team, Kotoko scored contrary to local reports that he provoked the boxer.

“I didn’t even know he was a boxer, it was after the video went viral that I got to know,” he is quoted as having told Kumasi-based Oyerepa FM

“Sincerely I did nothing to merit such an assault from him. I was only jubilating when Kotoko scored. He approached me to leave his presence and before I realized, he had me.”

He also revealed that he has reported the matter to the police but the boxer and his representatives have been begging for an amicable settlement.

“His manager and family members have been asking that I withdraw the case so we settle it amicably but I’m yet to meet my dad so we decide.”

The fan sustained a gash under his left eye and had to be stitched.

Allotey could lose his boxing license as part of sanctions from Ghana Boxing Authority and other global boxing organisations.