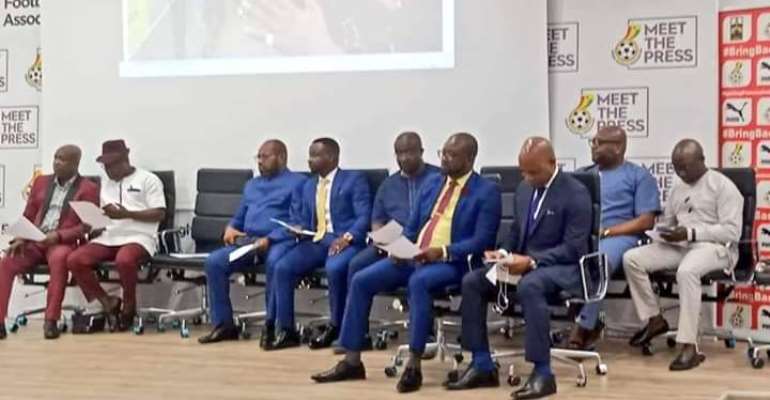 The Ghana Football Association (GFA) on Monday, January 27, 2020, held its maiden edition of ‘The Meet the Press’ series which they have adopted to give the sporting media the opportunity to pose relevant questions to be answered by officials of the body.

The press conference took place at the ultra-modern Auditorium of Exim Bank (near Cedi House) in Accra where the GFA President Kurt E.S Okraku, Vice President Mark Addo, as well as some other executive council members and key officials including the new general secretary, Prosper Harrison Addo took turns to answer questions from journalists.

The GFA president said there are working hard to secure sponsorship for the ongoing 2019/2020 Ghana Premier League season which is becoming attractive and enticing more football fans to watch the matches.

He commended the media for the support and prayed for better-improved quality productions.

He noted that the GFA products must be supported than taint or kill it, which is not good.

Meanwhile, the Ghana Football Association is set to ink a partnership deal with the State Transport Corporation (STC). The deal among others shall see the Ghanaian Transport company render services to referees and other match officials as part of a special package.

The arrangement between the GFA and STC will allow match officials to embark on two-way travels to officiate football matches as the football governing body bids to help solve challenges that confront the refereeing sector in the exercising of their duties.

The new coach of the Black Stars coach, Charles Kobina Akunnor in a video message appealed to the president of Ghana and Ghanaians to support him to succeed since he is a Ghanaian and all Ghanaians want the Black Stars to get back to winning ways.