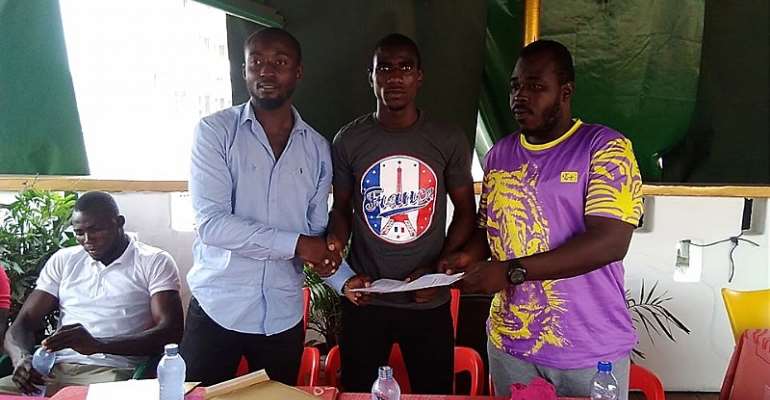 The signing ceremony took place on Monday, January 27th at the Back Pass Restaurant and was witnessed by the media and some family members and friends as well as fans of the boxers.

The boxers, Mohammed Ali based in Ashiaman and Yusif Seidu who trains at the Akotoku Academy Gym promised to abide by the three years contract and try their best to win continental and world titles for Ghana.

Akotoku Boxing Productions and Management which has ace boxing coach/matchmaker and now manager as the CEO, Theo Edwin Amankwah Addo was represented by the PRO, Elvis Roberson who said they have a lucrative package for the boxers to tour Australia and possibly engage in some fights there, USA and in Europe.

He hinted that the Akotoku Boxing Productions and Management is going to work with Penalosa Boxing Academy in Sydney, Australia to promote the boxers.

According to Robertson, there would be exchange programmes between Ghana and Australia to bring out the best of boxers from the two nations.

The contracts signing was witnessed also by the trainers of the boxers, Kisco Nyame and coach Major who advised them to be patient, humble and disciplined at all times to attract favours and the luck to reach their desired goals.

Both Mohammed Ali and Yusif Seidu performed well as amateurs in the Black Bomber senior and junior teams, with over 40 bouts each and they are optimistic of carrying the flag of Ghana high in the professional ranks.

They thanked Theo Addo for the opportunity and prayed that he succeeds in all things that he does in boxing.