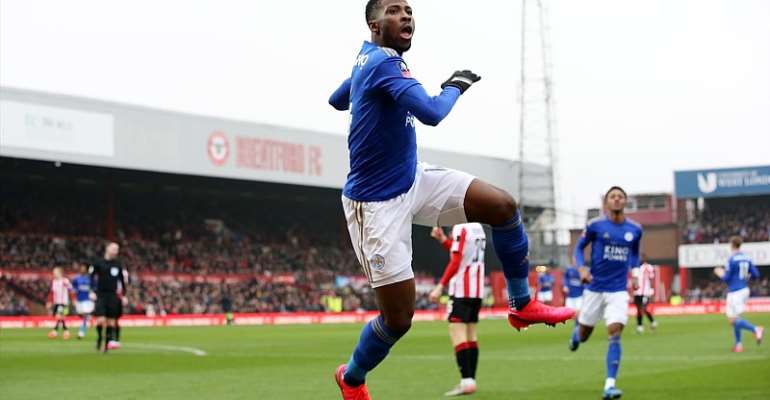 Nigeria international Kelechi Iheanacho was the star African performer in Europe this weekend, scoring the only goal as Leicester overcame a tough FA Cup challenge.

England
KELECHI IHEANACHO (Leicester)
Iheanacho took his chance to impress in the absence of the injured Jamie Vardy with the only goal as Leicester reached the FA Cup fifth round with a 1-0 win at Brentford. The Nigerian's predatory close-range finish took his tally to seven goals in just 12 appearances for the Foxes this season.

SOFIANE BOUFAL (Southampton)
Boufal produced a brilliant strike late on to secure the Saints an FA Cup replay with Tottenham in a 1-1 draw. The Moroccan has featured little in Southampton's revival of late but gave Ralph Hasenhuttl a timely reminder of his talent as he fired high past Hugo Lloris from the edge of the area.

Italy
MUSA BARROW (Bologna)
Gambian striker Musa Barrow had an immediate impact, scoring for Bologna in his first game since moving from Atalanta, in a 3-1 win over SPAL in the Emilia Romagna derby. Barrow came off the bench just before the hour mark and within a minute scored the second goal as Bologna earned their first win in a month to sit four points off the Europa League places.

Germany
ACHRAF HAKIMI (Borussia Dortmund)
Dortmund right back Hakimi has been clocked at 36.20 km/h this season – the quickest ever recorded in the Bundesliga – and his raw pace frequently troubled Cologne down the right flank as his side ran out 5-1 victors at Signal Iduna Park. After a stellar first half of the season, Hakimi has been overshadowed by Jadon Sancho and the arrival of Erling Haaland since the winter break but still remains one of Dortmund’s most potent attacking threats.

CHRISTOPHER ANTWI-ADJEI (Paderborn)
Ghanaian midfielder Antwi-Adjei scored his first top-flight goal for Paderborn in his side’s crucial 2-0 away win over SC Freiburg which lifts his side off the bottom of the Bundesliga. Antwi-Adjei, who scored 10 goals in Paderborn's run to promotion last season, showed impressive balance and composure to fend off Freiburg defender Jonathan Schmid while sliding the ball under goalkeeper Alexander Schwolow in the 48th minute to give Paderborn the lead.

AMINE HARIT (Schalke)
Midfielder Harit was one of the few Schalke players to emerge with his head held high after the visitors were put to the sword by a rampant Bayern 5-0 at Munich's Allianz Arena. Harit provided spark in midfield for the visitors, having two clear-cut chances to score in the first half.

Spain
ZOUHAIR FEDDAL (Real Betis)
Moroccan defender Zouhair Feddal was sent off as Real Betis were undone by a controversial late penalty in a 1-0 defeat by Getafe in La Liga on Sunday. Feddal's red card came in the 90th minute for his protests against referee Prieto Iglesias' decision to award Getafe a spot-kick. Angel Rodriguez converted to lift Getafe up to fourth in the table while the loss for Betis means they slip to 12th.

France
KARL TOKO EKAMBI (Lyon)
The Cameroonian only arrived in Lyon on Monday at the start of his loan period from Villarreal and had his first training session on Wednesday. Introduced from the bench after 25 minutes in Sunday's home game against Toulouse, he made an immediate impact, scoring his goal for the club in the 77th minute to close out a 3-0 win that leaves Lyon in fifth, five points off the Champions League places.