Put Up Or Shut Up – Alhaji Inusah Warn Negative Critics 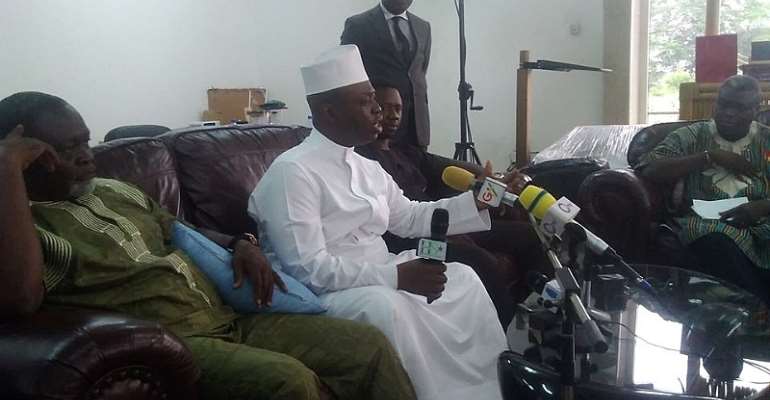 Boxing philanthropist, Alhaji Inusah Sally has cautioned people who talk negatively about Ghana Boxing but never invest in the game to contribute meaningfully or shut up.

Speaking at a media gathering at his office in Accra to launch a documentary on young USA based Ghanaian born 12-year-old boxer, Joseph Awinongya Jr. he passionately appealed to those who do not invest in boxing but are quick to criticize managers, boxers and coaches to change their style because boxing is a different business of sports on its own.

He said boxing is a game that a manager plays for the opponent’s hotel bills and purse, so the people behind the game do a lot that is not known publicly.

The inspirer of former WBC Featherweight champion, professor Azumah Nelson who in the past drove his car behind the champ while he was jogging indicated that boxing is a tough profession, and it takes hard work to reach the top.

According to Alhaji Inusah, becoming a champion and staying up there on top of the rankings to defend is another thing altogether, so people should always respect and glorifyAzumah Nelson who was able to defend his world titles for 10 years, adding the WBC super featherweight belt and collecting the SWAG Sports Personality of the year award seven times.

He said Awinongya is doing well because he is in an environment that everything is moving right and he is well kept by those who love what he is doing.

Professor Azumah Nelson said boxing is for gentlemen, and parents should help their kids find their talent and develop it.

“If you buy many toys for your kid, you can see the ones that he or she plays most with and you will know what they like” he expressed.

Azumah Nelson aka Zoom Zoom who is a world boxing Hall of Fame personality for Africa said that as the world is developing, others are living behind, and called for more government investment in sports, especially boxing which has given Ghana 10 world champions.

He urged the government to invest in the amateur level so that they can turn out fully baked professional boxers who will not go out to disgrace the nation.

‘There are many people walking around town jobless with papers called certificates and most of them are wasting their talent’ he stressed.

He advised Joseph Awinonyga Jr. to stay and train in the USA, and even don the USA colours at international competition, but visit his roots whenever he gets the opportunity.