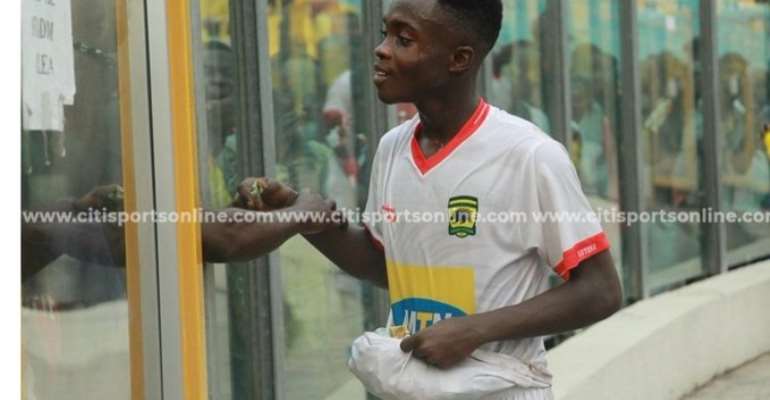 Teenage sensation Mathew Anim Cudjoe has been gifted with cash from supporters of Kumasi Asante Kotoko after his performance against Accra Hearts of Oak on Sunday afternoon.

The 16-year old started the Ghana Premier League match between the Phobians and the Porcupine Warriors from the bench but was introduced in the second half to replace Augustine Okrah on the 73rd minute.

The youngster later went on to wow fans with his trickery on the ball and his ability to go around defenders in the blink of an eye.

With the scoreline pegged at one-all, Mathew Anim Cudjoe went on a run past his marker and sent in a good cross on 76th minute which almost ended up with a goal. Emmanuel Gyamfi’s header was tipped over the crossbar by Richard Attah who was in post for the Phobians.

The teenager later went on to help the Porcupine Warriors win the super clash by two goals to one to earn the side an important 3 points in the process.

At the end of the match, Cudjoe was dashed money at the stadium by Kotoko fans who enjoyed his blistering display on the afternoon.