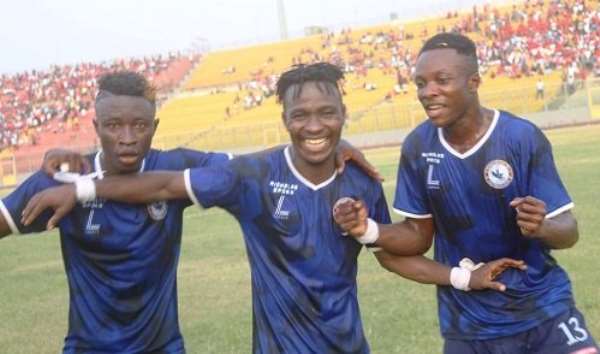 Berekum Chelsea has maintained its unbeaten run in the ongoing Ghana Premier League season after drawing one-all with Aduana Stars on Saturday afternoon.

Nicknamed the Blues, the Berekum-based club has enjoyed a fine start to this season’s campaign and went into today’s clash with the Fire Lads as the best performing club in the Division.

In their first five matches of the season, Berekum Chelsea has beaten the likes of Accra Hearts of Oak, Asante Kotoko, and Ashanti Gold. Coming up against Aduana Stars today in a Match Week 6 fixture, the team was tipped to go on and pick up another 3 points.

After a pulsating encounter, however, they have been forced to share the spoils with their visitor following a 1-1 draw at the end of the 90 minutes.

Chelsea took the lead after 17 minutes of play through Stephen Amankonah before Aduana Stars came in strong in the second half to restore parity courtesy a strike from Pious Asante Yeboah on the 86th minute.

The two top clubs remain in first and second positions respectively on the standings of the Ghana Premier League and might just stay there at the end of the matchday.