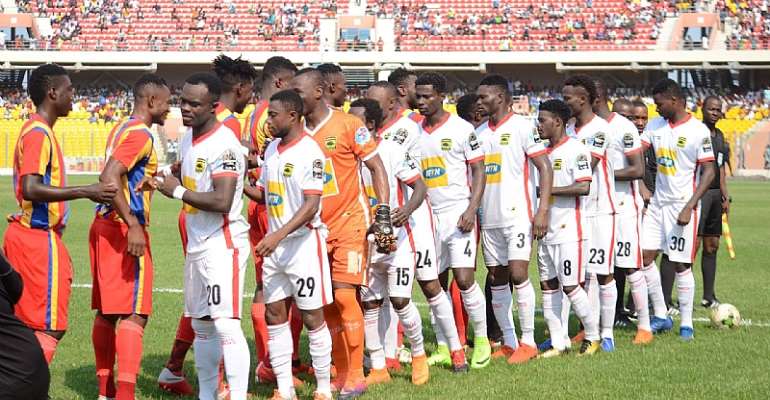 The matchday six of the 2019/20 Ghana Premier League started on Friday night and will continue today [Saturday] and Sunday through to Monday.

On Friday, Legon Cities FC recorded their first win of the season against Bechem United at the Accra Sports Stadium by a lone goal whiles Liberty Professionals travelled to Sogakope to beat WAFA 2:1.

The rest of the matches comes on today, Sunday and Monday.

Modernghana.com previews the rest of the matches.

Berekum Chelsea have been the surprise of the season and have been tagged as favourites to win the ongoing Premier League. After five matches played, the Blues are occupying the league log with 13 points and are yet to lose a match.

They have been giants killers after beating Kotoko Hearts of Oak and Ashgold at the various homes. Joseph Asare Bediako and his charges will host the two times Ghana Premier League winners at the Berekum Golden City on Saturday.

The home side will be hoping to continue their brilliant run against the ‘Ogya Boys’. However, W.O Tandoh and his lads returned to winning ways against Legon Cities FC beaten them 2:0 after losing to Techiman Eleven Wonders at Techiman Park and will hope to end the unbeaten run of the Blues.

Medeama were stunned by a lone goal by Dreams FC at the Theatre of Dreams in the matchday fixtures to end their unbeaten run. However, Samuel Boadu and his side will return to their home grounds and will host Ashgold who also suffered their first defeat to Berekum Chelsea at home.

Despite the defeat to the Still Believe Boys, Medeama are at the 3rd position with 10 points but will have to beat Ashgold to keep their title hopes alive.

Medeama will host the Miners at the Akoon Park in Tarkwa.

However, Ashgold, who are also occupying the 4th position with 10 points and will be hoping to maintain their position in the top four and possibly challenge for the ultimate.

Olympics went to get a pint against Elmina Sharks in the matchday five game. Going back to their home grounds, the two times Ghana Premier League winners will be hoping to beat their rivals.

Allies have been struggling winning one, losing three and drawing one after five matches played leaving them at the 14th position with just four points.

The match of the weekend is between Hearts of Oak and Asante Kotoko. It is the only match that will be played on Sunday.

Hearts of Oak are on a brilliant run after Edward Nii Odoom took charge of the club. They are undefeated in their last four matches played. Their latest win came when they fought back to beat Liberty Professionals at the Carl Reindorf Park last week Sunday.

This has been touted as Ghana’s version of the El Classico. Over the years Kotoko have always won at the Accra Sports but with the impressive form of the Phobians, they will be hoping to break that jinx against their bitter rivals.

Below is the full fixtures for week six