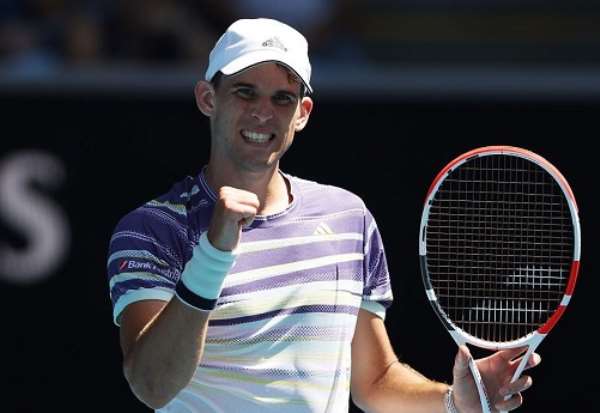 Austrian Thiem had a 5-3 lead in the second set but lost five games in a row, and it was Bolt who came out on top in a tight third-set tie-break.

But Thiem took advantage of a tiring Bolt to complete a fine win.

Bolt, who also plays basketball in a local Melbourne league, had beaten Spain's Albert Ramos Vinolas in five sets to set up the meeting with Thiem.

Given vocal support by a packed Melbourne Arena, he pushed Thiem until the fourth set, where he appeared heavy-legged.

Thiem, one of the fittest players on tour, took advantage to outlast his opponent in three hours and 26 minutes.

He will play either American Taylor Fritz or South Africa's Kevin Anderson next and could face world number one Rafael Nadal in the quarter-finals.

"It was great fun for both of us - it's really nice to play under such an atmosphere," Thiem said.

"The crowd was very fair - of course they were for Alex, he's an Aussie, that's completely obvious.

"But it's nice to play in front of a full crowd that's against you than an empty one."

Medvedev, Zverev through
Fourth seed Daniil Medvedev reached the third round with a straight-set win over Spanish qualifier Pedro Martinez.

The 23-year-old, beaten in September's US Open final, had a nosebleed in the second set but won 7-5 6-1 6-3 in just over two hours on Margaret Court Arena.

Germany seventh seed Alexander Zverev, who has yet to go beyond the fourth round in Australia, beat Belarusian Egor Gerasimov 7-6 (7-5) 6-4 7-5.

Qualifier Ernests Gulbis of Latvia reached the Melbourne third round for the first time in his career with a straight-set win over Aljaz Bedene.