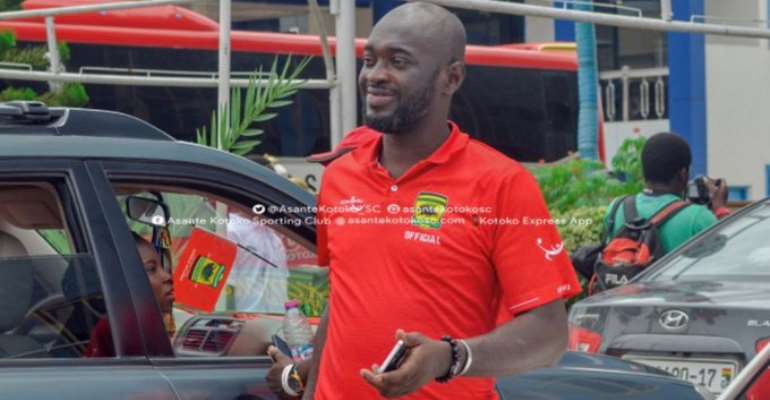 Asante Kotoko spokesman Kennedy Boakye-Ansah has been given a five-match stadium ban for forcefully given instructions to a red-carded Kotoko player, not to obey the Referee’s decision during the 0-1 loss to Berekum Chelsea in GPL match 3.

The other management member, Isaac Donkor had to be restrained from confronting referee Charles Bulu after the incident by the Police.

Kennedy and Perusha, who have the right to appeal, have also been fined GHc5000 each.

In separate charges Mr Boakye Ansah and Mr Isaac Donkor aka Perusha allegedly invaded the inner perimeter during Kotoko’s match against Berekum Chelsea and forcefully gave instructions to Ampem Dacosta, a player of the Club who was shown a red card, not to obey the Referee’s decision.

The Club’s PRO’s actions brought the game to a temporary halt , which eventually gave Kotoko’s supporters the zeal to agitate contrary to Regulation 34(1)(a) of GFA Premier League Regulations.

Mr Boakye Ansah’s actions was also deemed to have incited players against other players or match officials because of their decisions or encouraged an unhealthy demonstration in whatever form contrary to Regulation 34(1)(b) of GFA Premier League Regulations.

Both officials of the Club are deemed to have misconducted themselves though their alleged offensive conducts and improper behaviour.

Should Mr. Boakye Ansah and Mr. Isaac Donkor accept the charges against them, they will serve a ban of 5 matches each from all football-related activities and liable to fines of GHc5000 each in accordance with Article 34(7) of the GFA Premier League Regulations.

The two Asante Kotoko Officials have within two days to either accept the charge and immediately comply with the sanctions and that will end this matter or otherwise proceed to submit their Statements of Defence.

The Prosecution will rely on the evidence in the reports of the Referee, the Match Commissioner, any witness(es) and video of the match.

Should this matter proceed to the Disciplinary Committee, it will hear the case on Friday, January 24, 2020, at 5:05pm at the GFA Secretariat if the Club is present or not.Kotoko PRO Banned