GHPL: We Are Ready For Hearts of Oak Encounter On Sunday - Maxwell Konadu 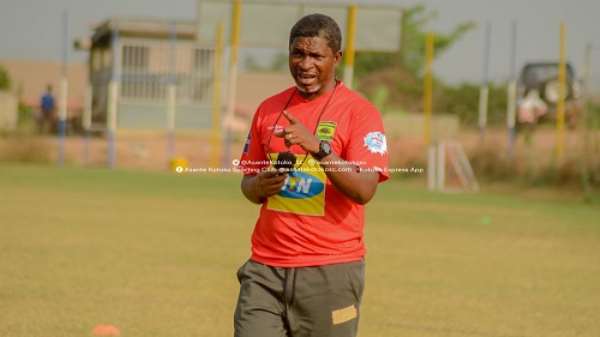 Asante Kotoko coach, Maxwell Konadu has reiterated his side readiness ahead of their matchday six fixture against their sworn rivals, Hearts of Oak.

Hearts will host the Porcupine Warriors at the Accra Sports Stadium in Ghana's version of El Clasico.

Hearts of Oak rallied from behind to beat Liberty Professional 2-1 at the Carl Reindorf Park in Dansoman courtesy strikes from Bernard Arthur and Kofi Kordzi.

"Kotoko is always ready for Hearts of Oak encounters," coach Konadu said after the game against Dwarfs.

"I believe they are always ready for us. You know matches between the two sides is a high profile game and nobody is going to relax.

He added, "I know they are preparing very well and have one eye on this game."

"It's going to be an interesting game anyway. We have one eye over there. The El Clásico is on, let's wait and see what happens on Sunday."

Late goals from 16-year-old Mathew Anim Cudjoe and Richard Arthur ensured victory for the Porcupines. Speaking after the game against Dwarfs, Konadu said the Porcupines are not scared of the rivals.