African Players In Europe: Salah Strikes As Liverpool Stroll On 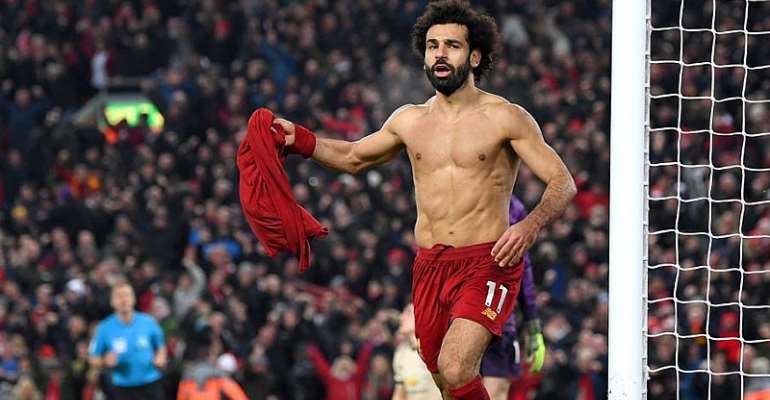 Mohamed Salah scored his first-ever goal against Manchester United to keep Liverpool on the road to their first English league title in 30 years while Victor Osimhen and Bastos were on target for Lille and Lazio.

Here is a look at some of the key performances from Africans playing in Europe:

ENGLAND
MOHAMED SALAH (Liverpool)
The Egypt forward finally scored against Manchester United for the first time in the Premier League to wrap up the runaway leaders' 2-0 win at Anfield on Sunday.

With Liverpool clinging on to the lead given to them by Virgil van Dijk's early goal, Salah ended United's threat in the third minute of stoppage-time, running on to Alisson Becker's long goal-kick to slot under David De Gea.

Sprinting towards the Kop, Salah whipped his shirt off in celebration of a goal that moved Liverpool 16 points clear at the top as they chase a first English title since 1990.

RIYAD MAHREZ (Manchester City)
The Algeria winger came off the bench to spark his side into life but it wasn't enough to prevent Crystal Palace snatching a 2-2 draw at the Etihad Stadium on Saturday. Sergio Aguero scored twice to put City ahead in the closing minutes, only for Fernandinho's last-gasp own goal to put another dent in his team's fading title hopes.

NICOLAS PEPE (Arsenal)
The Ivory Coast winger's difficult first season with the Gunners remains an issue for boss Mikel Arteta after he struggled to impose himself during Saturday's 1-1 draw against Sheffield United at the Emirates Stadium. Pepe, who barely troubled the Blades, has scored just five times since his close-season move from French club Lille and has offered only flashes of his potential. Gabon forward Pierre-Emerick Aubameyang missed the game through suspension.

FRANCE
VICTOR OSIMHEN (Lille)
Nigeria forward Osimhen has been impressive this season after taking over from Nicolas Pepe following the Ivorian's move to Arsenal in the summer, bagging 15 goals in 28 matches in all competitions. The 21-year-old's late strike after coming on as a substitite at fifth-tier Gonfreville highlighted the skills that reportedly attracted the attention of Barcelona, racing through in the final minute before lofting home a classy finish.

SPAIN
ALLAN NYON (Getafe)
Getafe right-back Allan Nyom proved an unlikely scorer on Friday night in his team's 3-0 win away at Leganes. The Cameroon defender headed in off the underside of the crossbar as Getafe scored three goals in 21 first-half minutes. Nyom's second goal of the season helped Getafe climb to fifth in La Liga, two points behind Sevilla and the Champions League qualification places.

ITALY
BASTOS (Lazio)
Angolan defender Bastos tapped in nine minutes after the break for a rare goal, the 28-year-old's first this season, to give title-chasing Lazio their fourth goal in a thumping 5-1 win over Sampdoria.

JEREMIE BOGA (Sassuolo)
Ivory Coast international Jeremie Boga scored a stunning long-range goal, his fifth this season, after an hour and then set up Domenico Berardi for the winner on 73 minutes as 15th-placed Sassuolo shocked Torino 2-1 to end a winless run going back to November 8.

GERMANY
ANTHONY UJAH (Union Berlin)
The Nigeria striker came on for the last 15 minutes of Union's 3-1 loss to Bundesliga league leaders RB Leipzig. The 29-year-old had 10 touches of the ball, but only limited chances as goals by Timo Werner either side of a Marcel Sabitzer strike sealed Leipzig's win after Marius Buelter had given mid-table Union a shock first-half lead.