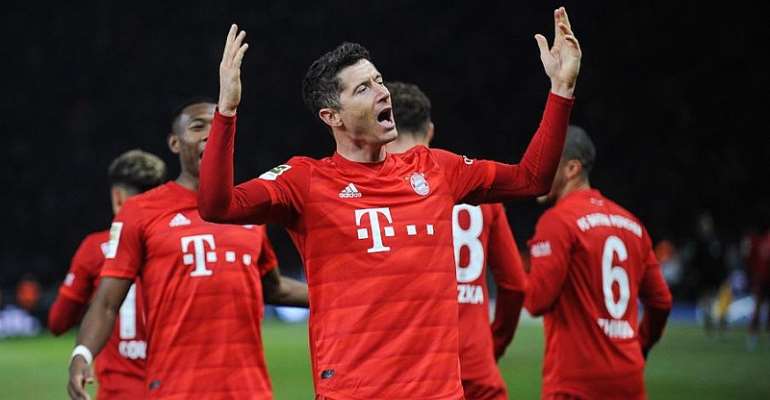 Robert Lewandowski hit his 20th league goal this season as Bayern Munich climbed to second in the Bundesliga Sunday with a 4-0 romp at Hertha Berlin to trim RB Leipzig's lead to four points.

Having seen RB Leipzig go five points clear with a 3-1 win over Union Berlin on Saturday, Bayern climbed a place in the Bundesliga with second-half goals in the capital by Thomas Mueller, Lewandowski, Thiago Alcantara and Ivan Perisic.

After Leipzig's Germany striker Timo Werner had edged ahead of him as the league's top scorer with two goals against Union, Lewandowski drew level with his main rival's tally on 20 league goals by converting a penalty.

Lewandowski and Werner are now the first players in Bundesliga history to have scored 20 goals after 18 games in their challenge to Gerd Mueller's record of 40 goals in a Bundesliga season, set in 1971/72.

After a groin injury last month, Lewandowski proved his fitness with an lively display at Berlin's Olympic Stadium.

He now has 31 goals in 26 games in all competitions, including 10 in just five Champions League games.

There was good news before kick-off for Hertha coach Jurgen Klinsmann as the German Football Association (DFB) confirmed his coaching licence is valid after doubts emerged last week over whether the certificate earned in 2000 had expired.

There was little else to cheer Hertha fans as Bayern established supremacy with nearly 70 percent possession as the defending champions struggling however to break Hertha's defence.

The breach finally came on 60 minutes when Leon Goretzka put a cross to the far post, Perisic headed back and Mueller crashed home the shot.

Lewandowski had a header disallowed soon after when the video assistant referee spotted the striker made contact with Hertha goalkeeper Rune Jarstein, who had claimed the cross a millisecond before.

However, when Bayern were awarded a penalty after Goretzka was upended, Lewandowski sent Jarstein the wrong way to put Bayern 2-0 up with 73 minutes gone.

Alcantara added a third with superb finishing after the Hertha defence had again been shredded and Perisic was finally rewarded for a good display when he headed home with six minutes left with an assist from Mueller.

The victory in Berlin sets Bayern up for Saturday's crunch home clash against fifth-placed Schalke, who beat fellow title contenders Moenchengladbach 2-0 in Gelsenkirchen on Friday.