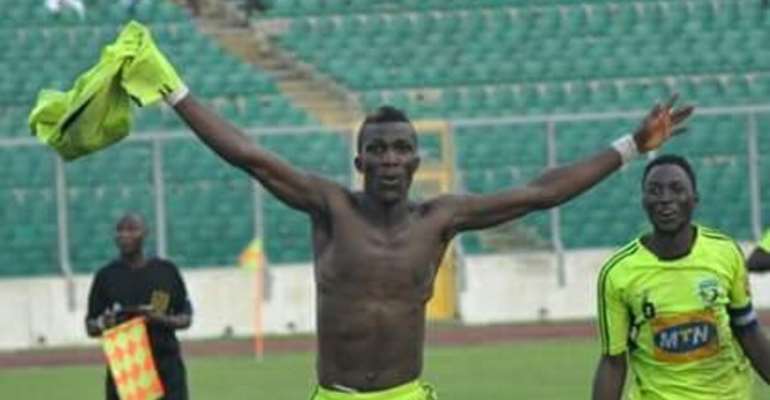 New Hearts of Oak signing, Abednego Tetteh has reiterated that he will score for his side when they battle rivals Asante Kotoko in their crucial Ghana Premier League clash week six fixture at the Accra Sports Stadium.

Hearts of Oak continued their fine form in the Ghana Premier League after beating Liberty Professionals by 2:1 at the Carl Reindorf in the matchday five fixtures.

In an attempt to solve the problem of goal scoring, they have acquired the services of a goal poacher Abednego Tetteh who excelled brilliantly during his spell with Bechem United in 2016.

Speaking on OTEC FM, the prolific striker said, “I am left with some few documentations with Hearts of Oak but I can confirm it’s 90% done,”

When quizzed about the impact he brings to the Phobians he replied by saying, “I am a striker and my duty is to score.

Hearts of Oak host Kumasi Asante Kotoko in week six of the Ghana Premier League and the highly-rated striker has assured the teeming fans of the former Caf Champions League winners that he will score in the epic clash against their biggest rivals Asante Kotoko at the Accra Sports Stadium if only featured in the match.

“I will score in that game should I get the chance to play in that big game,” said confident Abednego Tetteh.

The lanky forward watched Hearts beat Ebusua Dwarfs in Accra before travelling with the club to Sogakope in their goalless draw with WAFA.

He was a member of the Bechem United team that won the FA Cup in 2016 before leaving the shores of Ghana to play for Sudanese giants Al Hilal.