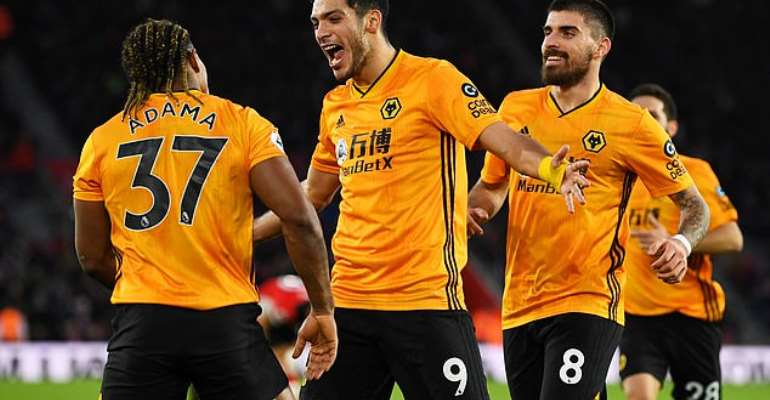 Wolverhampton Wanderers came back from two goals down to beat Southampton 3-2 in the Premier League on Saturday as Mexican striker Raul Jimenez scored twice in a thrilling second half at St Mary's Stadium.

Southampton looked set for a fifth win in six matches when Polish defender Jan Bednarek broke the deadlock, before Shane Long scored his first goal of the season to put the hosts in control at halftime.

However, the momentum shifted early in the second half as Portuguese teenager Pedro Neto found the net for Wolves after controlling a drilled cross Adama Traore.

Wolves were soon awarded a penalty after Jonny was brought down in the box by Saints defenders Jack Stephens and Bednarek.

Referee Darren England, making his Premier League debut, had initially pointed for a corner before his decision was overturned by the video assistant referee (VAR).

Jimenez scored from the spot before completing the comeback in the 76th minute with his 19th goal for Wolves across all competitions this season.

Wolves boss Nuno Espirito Santo revealed a "lot of things" were said in the dressing room during the interval after they fell behind in a league game for a seventh consecutive time.

The discussions led to the manager tweaking his formation to deploy Spanish winger Traore in a central role as the visitors adopted a more direct approach to spark chaos in the Saints defensive line.

"We just put Adama more in the middle," Nuno said. "When you adjust during the game, inside the stress of the game, and he immediately produces it's a big step for you.

"We don't have time to be in the training ground so these solutions we have to give and we did it."

Southampton had their own chances to respond through Nathan Redmond and Ryan Bertrand but they failed to find the back of the net as the hosts suffered their first defeat in six league matches.

Wolves ended their three-match winless run to move up to sixth in the standings and level on points with fifth-placed Manchester United, while Southampton remain 12th.