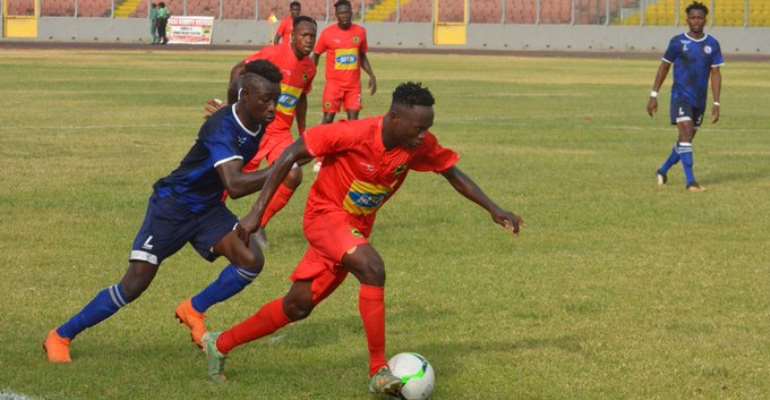 The Ghana Football Association (GFA) has outlined strict measures for the clash between Asante Kotoko and Ebusua Dwarfs this weekend in the Ghana Premier League.

The Porcupine Warriors will be playing as the home team in a match scheduled to be played at the Baba Yara Sports Stadium.

Following an incidence of violence at the venue in the club’s last home game against Berekum Chelsea, they have been directed to play five home games behind closed doors as punishment.

The punishment starts this weekend where Kotoko is expected to face Ebusua Dwarfs on Match Week 5.

Ahead of the match, the competition department of the Ghana FA has announced the expected arrangements. They have been warned that no supporter will be allowed into the stadium and hence should be adhered to accordingly.

Below is a statement from the GFA today outlining measures that should be followed:

The GFA's Competition's Department has announced arrangements for Asante Kotoko's Matchday 5 fixture against Ebusua Dwarfs on Sunday, January 19 at the Baba Yara Stadium.

This is as a result of the charges of the Prosecutor in the matter of misconduct against Asante Kotoko after their Day 3 fixture against Berekum Chelsea.

In line with the implementation of the decision, the Competitions department has directed that the following should be strictly adhered to;

Also, adequate security should be situated in the inner perimeter, within the stadium, and outside the stadium.

The directive is also emphatic that no other spectator should be allowed in the stadium.

Asante Kotoko has been informed to submit the list of ten management executives latest by 5pm on Saturday, January 18.

I weep for Ghana for allowing Medusa-like head judgement de...
30 minutes ago