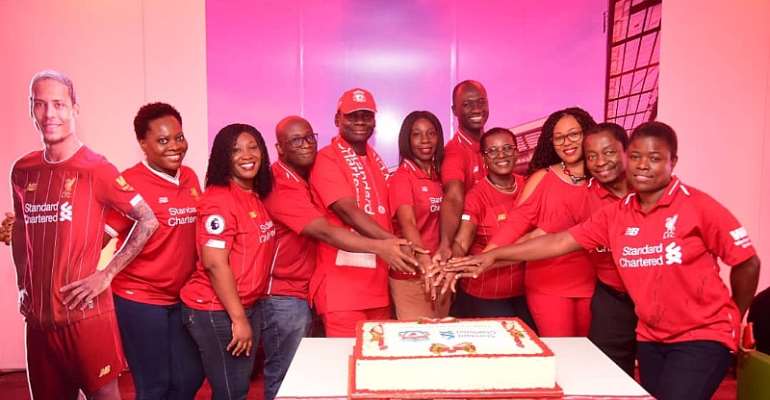 Accra 17th January 2020 – Standard Chartered has been the Official Main Partner of Liverpool FC (LFC) since 2010 and this year marks the 10th anniversary of the longstanding partnership.

As part of the celebrations of this important milestone, the Bank created the event – Red for a Day – where employees around the globe unite around the power of partnership and wore red for a day, today 17th January 2020.

Staff in the Bank all wearing red joined the Management Team to kick off the day with the cutting of a celebratory cake. A special Anfield Red Room has been set up with various games to celebrate the 10th anniversary of the Standard Chartered-LFC partnership.

The Bank will also host a live match viewing party for staff, clients and all stakeholders to watch one of the most anticipated games of the Premier League season with LFC taking on Manchester United FC at Anfield on Sunday 20th January 2020, at AM & PM.

The Bank renewed its sponsorship contract with LFC in 2018 and the relationship with the Club would extend to the end of the 2022-23 season, making it the second-longest sponsorship deal in Reds’ history.

Standard Chartered Bank Ghana Limited is Ghana’s premier bank established in 1896. We are part of a leading international banking group, with a presence in more than 60 of the world’s most dynamic markets.

Our purpose is to drive commerce and prosperity through our unique diversity. Our heritage and values are expressed in our brand promise, Here for good.

The Bank is listed on the Ghana Stock Exchange and has been one of the leading stocks over a sustained period.

As a socially responsible Club, Liverpool FC is proud of its heritage and plays a proactive role in its communities through its official charity, Liverpool FC Foundation, which aims to create life-changing opportunities for children and young people in Merseyside and beyond, and the Red Neighbours programme, which creates events and experiences specifically aimed at improving the lives of those living in and around the Anfield area (L4, L5 and L6).

Liverpool FC is a global brand and works with leading-edge commercial partners around the world providing unparalleled commercial opportunities.