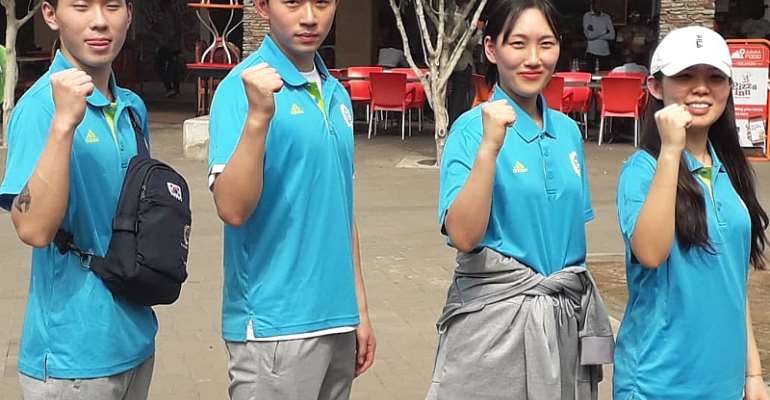 Four young taekwondo experts from the Republic of Korea, comprising two males and two females, last Thursday arrived in the country to participate in a Ghana Taekwondo Federation (GTF) School-to-School campaign from January 7 to February 7.

The exercise, aimed at promoting taekwondo as an extra-curricular activity in basic schools, will see members of the GTF moving from school to school to showcase the benefits of the sport to children of all ages.

According to the GTF, the drive was to expand its practitioner base by selling the taekwondo idea to, especially international schools, with over 50 schools targeted to take part in the exercise.

In an interview with the Daily Graphic, the Secretary-General of the GTF and Coordinator of the exercise, Adnan O. Lamptey, revealed that Ghana had benefited from the World Taekwondo Peace Corps (WTPC) programme in the past few years.

He explained that through the programme, a team of four young taekwondo practitioners with majors in the sport had been sent to the country to promote global peace in all the regions of the country.

“We are looking at developing the sport from the basic school level and these four Korean athletes are in to partake in it.

“This, we believe, will make way for the various basic schools to adopt the sport as an extra-curricular activity,” he noted.

Mr Lamptey, however, stated that the visit to the schools would be pre-arranged and would take between 15 and 30 minutes.

The team will carry out a brief presentation about taekwondo and also put up an exciting demonstration.

Taekwondo is a martial art and a sport that offers many benefits to children. It improves motor skills, helps correct attention disorder, controls hyperactivity, sharpens the reflex, instils self-discipline and promotes overall fitness.