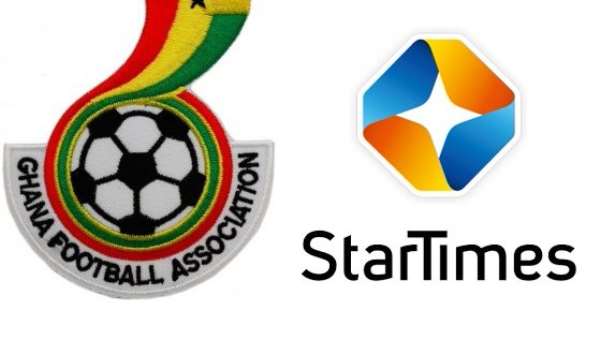 The Chairman of the National Media Commission (NMC), Mr Yaw Boadu-Ayeboafoh wants the Ghana Football Association (GFA) to publish the details of the offer that the Chinese owned StarTimes TV used to win the television broadcast rights bid of the Ghana Premier League over the state broadcaster, the Ghana Broadcasting Corporation (GBC).

According to him, it was only fair that Ghanaians were made aware of the Startimes offer as the GFA had published that of GBC in the media.

He said Ghanaians would be in a better position to judge for themselves whether GFA made the best decision in giving the television broadcast rights of the Ghana Premier League and the FA Cup competition to the pay-TV operator, StarTimes over the state broadcaster.

Board inauguration
Mr Boadu-Ayeboafoh made the call the inauguration of the governing board of the GBC on Wednesday [January 15, 2020] at the corporation’s head office in Accra.

He said he felt embarrassed when he first heard in the news that the state broadcaster lost the television broadcast rights to StarTimes.

"When I first heard the news, I felt so embarrassed within me that I tried to mobilise public support to resist this kind of imperialist decision," Mr Boadu-Ayeboafoh said.

"And when I saw their (GFA) rejoinder to the GBC thing, I said, what is this? Now, I will want to say this because I have not met the GFA...I decided that I was going to talk to Kurt [Okuraku - GFA President] over this matter to find out why they decided what they decided.

"But before that, what I want is that in the same way that they published the details of the offer of the GBC, they should publish the offer of StarTimes. They should make it public so that the average Ghanaian can judge for himself whether indeed, that is the best deal that will offer us those opportunities."

"But on the other side of it, I want to sound a caution to GBC, both management and staff. If anybody decides to go and do ‘galamsey’ (to work with StarTimes without any official approval), he must understand that he is not working for GBC but they are working for themselves and they must pay the ultimate price.

"Now if in the national interest, at any point, the services of the GBC are required to ensure the programme becomes successful, I think that we should negotiate for value for money and not sell out as we have been doing all the time," Mr Boadu-Ayeboafoh noted.

GFA/GBC banter
The GFA on Wednesday, January 8, this year, announced that the Chinese-owned StarTimes had won the television broadcast rights over the Ghana Premier League and the FA Cup competition in a $5.25 million (GH¢29.79 million) deal over the next five years.

The GFA’s announcement drew an immediate reaction from GBC, which questioned the basis of the GFA’s assessment, claiming that the corporation’s bid was both financially and technically superior to that of StarTimes.

Similarly, the GFA in a response to GBC’s statement defended its choice and accused GBC of deliberately misinforming the public on the facts of the case.

Mr Boadu-Ayeboafoh in his remarks charged the new board to work to ensure that the company regained its lost glory, saying the NMC would not interfere or undermine the work of the board in the discharge of their duties.

“You must corporate with the board,” he said, adding “give each member of the board the respect they deserve. We should not undermine one authority to improve another”

Mr Boadu-Ayeboafoah also cautioned the staff not to dictate to the NMC the calibre of people they would want on the board for the corporation, saying “we will listen to workers. We will not take workers for granted but we will not surrender the power vested to us.” 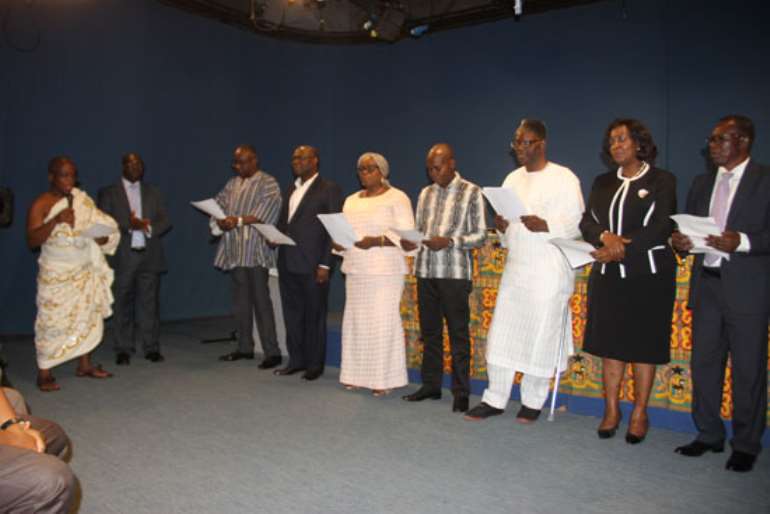 DG
The Director-General of the GBC, Professor Amin Alhassan, commended the NMC for giving the corporation a board, pointing out that “the structure of corporate governance is incomplete without a board.”

He expressed the hope that the new board would help to reposition the corporation, saying “GBC is ripe for change.”

According to him, the changing media landscape required the station to restructure itself so as to remain relevant and viable not only in the local space but internationally.

Prof. Alhassan said media audience had changed, hence the need for the state broadcaster to develop content that would meet the needs of the current audience. 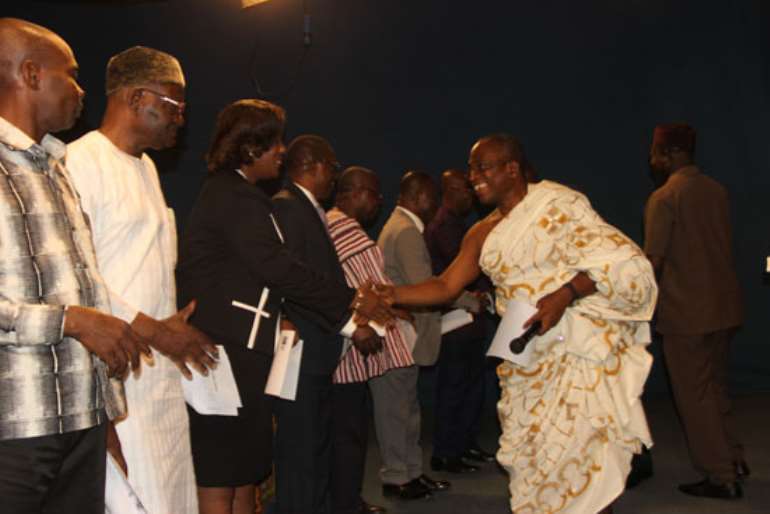 Board Chair
For his part, prof Addow-Obeng said the board was aware of the challenges confronting the corporation and the media landscape as a whole, pledging that the board would pool their expertise to ensure that the state broadcaster become “a tool for nation-building and education.”

“We must all find innovative ways of bringing GBC back to its former glory,” he said, stressing that the board would protect the institutional image of the corporation.

Save Keta Municipal Assembly from bleeding - Protestors to A...
5 minutes ago