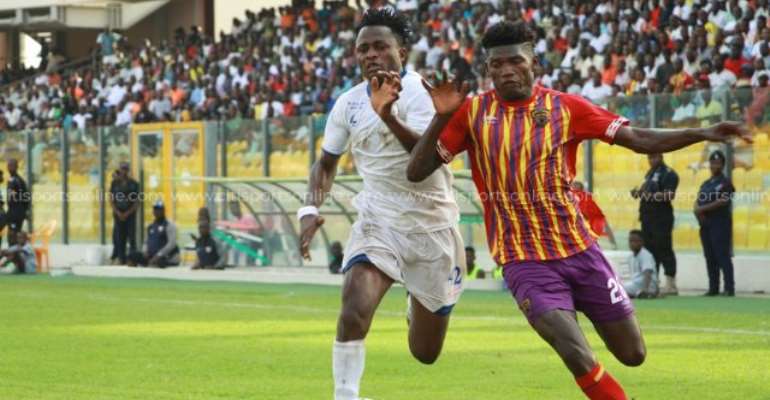 The 2019/20 Ghana Premier League season enters its first midweek round with some enticing encounters to look out for.

Asante Kotoko will travel to Tarkwa to face in-form Medeama and their arch-rivals Hearts of Oak make a trip to Sogakope to face WAFA.

Elsewhere, Legon Cities will play AshantiGold in Accra as Berekum Chelsea look to maintain their unbeaten run against Dreams FC.

The last match of the round will be on Thursday at the Accra Sports Stadium where Great Olympics will take on Karela United.

They were however held to a 0-0 draw at home by Liberty Professionals on matchday 2. The Blues are currently in 6th place and will look to extend their unbeaten run against Dreams FC.

Dreams FC aim to get back to winning ways after recording a disappointing 0-0 draw against Legon Cities at the Theatre of Dreams. The Dawu-based club clinched two wins before matchday 3, leaving them in 4th place with 7 points. Karim Zito’s men will hope to upset the hosts during the midweek.

In their last three meetings, both teams have won one each and shared the spoils in the other fixture. It will be interesting to see how this turns out.

It is very difficult to separate the two sides at the moment. The two teams will most likely cancel each other out and share the spoils in this fixture.

The Cape Coast-based side last suffered a 2-1 defeat to Hearts of Oak at the Accra Sports Stadium leaving them in the relegation zone (16th) with seven goals conceded and only two goals scored.

Ebusua Dwarfs will be under pressure to overcome their problems in defence and earn a win against Liberty Professionals.

Liberty Professionals have shared the spoils in all three Ghana Premier League games.

David Ocloo’s men held high flying Medeama to a 1-1 draw in Dansoman on matchday 3 and will hope to enter the top half of the table with a victory over the Mysterious Dwarfs after placing 10th on the log in three games.

In their last five meetings, Liberty Professionals have had the edge with three wins and two defeats. The Mysterious Dwarfs will be hoping to level the score on their home turf.

Ebusua Dwarfs have been uninspiring so far this season and with their defensive frailties, Liberty Professionals looks set to earn their first win of the campaign.

The Techiman based side have also failed to claim a point so far and are just one place above the relegation zone as a result. Ignatius Osei-Fosu’s men will hope to cause an upset against pacesetters Aduana Stars at the Techiman Park.

Aduana Stars have been superb so far this season, winning three matches on the trot.

Yahaya Mohammed has been the cream of the crop among his teammates in Aduana and the rest of the league, scoring five goals in three matches.

The former Kotoko striker most recently grabbed a brace against King Faisal and will look to increase his tally in Techiman.

On head-to-head basis, Aduana have been dominant in their last five encounters, winning three and losing one (W3 D1 L1). Eleven Wonders have to weave some magic to start a change in narrative.

Great Olympics v Karela United- Accra
The story of Great Olympics has been a sad one. Five goals conceded and zero goals scored with no points and last place on the log after matchday 3.

Prince David Koffie has had a torrid time getting his team to gel after the shocking exit of Isaac Nii Armah.

Oly Dade needs a quick upturn in form and their upcoming tie against Karela at the Accra Sports Stadium provides a chance for that to happen.

Karela United aim to grab their second win in a row after earning a last gasp 2-1 victory over Inter Allies.

The 2018 NC Special Competition Tier 1 finalists have earned four points so far in three matches and are currently in 9th place.

They will hope to grab their first away victory of the season as they prepare to face Olympics.

The two teams will lock horns for the very first time in the Ghana Premier League. A chance for both teams to earn bragging rights.

Great Olympics will likely end their goal drought but do not have enough steel to prevent the threat posed by Karela.

Inter Allies v Elmina Sharks- Accra
Elmina Sharks are in search of their first win of the campaign as they prepare for their fixture on matchday 4.

The Sharks have been lacking in the goal scoring department as well, finding the net on just one occasion in three matches.

At 14th place and with just 2 points, the Elmina based club will aim to acquire all three points as face Inter Allies.

Inter Allies aim to get back to winning ways after falling to a defeat against Karela. “Eleven is to one” have amassed just one win so far this season and would look to move up from their current 12th position on the Ghana Premier League table.

In their last five meetings, Elmina Sharks have been on top with two victories and two draws (W2 D2 L1). Inter Allies now have to even the score at the Accra Sports Stadium.

Elmina Sharks were well beaten in their previous away match this season and are unlikely to start a swift change in away form.

King Faisal v Bechem United- Kumasi
King Faisal have lost all three games so far with their defence being easily exploited by opponents.

The Kumasi-based club have conceded seven goals and have failed to be efficient enough at the other end, scoring just two goals and are in 17th place as a result.

They will hope to satisfy their fans with a win over Bechem in their upcoming clash.

Bechem United are out to clinch their second consecutive win this season after Adu Kwabena sealed all three points against struggling side Great Olympics in the previous matchday.

The Hunters have been good overall, winning twice and losing once and are currently in 7th place on the table.

Kwaku Danso will hope to lead his men to a crucial away win against the Kumasi based side.

It has been pretty even between the two teams on a head-to-head basis.

King Faisal have won one and Bechem United have also won one. They will face each other for the first time in six years and it will be interesting to see which club comes out on top.

King Faisal have been shambolic so far this season and with their leaky defense, they will be unable to stop Bechem United.

The Kumasi-based side’s objective now will be to get back to winning ways against an in-form Medeama.

Medeama have been arguably one of the best teams in this campaign with two victories including an impressive 3-0 scoreline against Hearts of Oak.

They were held to a draw by Liberty Professionals on matchday three but their attacking potency has been on full display.

Samuel Boadu will be without the services of Bright Enchil, Rashid Nortey and Eric Kwakwa due to injury but still has enough firepower to break down any team.

Medeama slightly edges Kotoko in their last five meetings, winning three and losing two. The Porcupine Warriors have failed to record an away win against Medeama in three games and would look to change that against the 2019 President’s Cup winners.

The hosts will pose a lot of problems that Maxwell Konadu’s side will be unable to handle and their bad away at Medeama leaves the Mauve and Yellows favourites for their third win of the season.

Legon Cities v AshantiGold- Accra
Legon Cities have won fans over with their marketing prowess and have secured the services of popular rapper Kwesi Arthur to perform at the Accra Sports Stadium on Wednesday but on the footballing side, they have been largely underwhelming.

With just 2 points so far and in 13th place, the Royals will look to thank the appearances of their fans with a win over league favourites AshantiGold.

AshantiGold have been excellent so far this season, comfortably dispatching three opponents in three games.

Goals have been hard to come by for some teams but it has been the opposite for the Miners, averaging 2 goals per game.

The Obuasi based side are one of three teams yet to concede a goal in the Ghana Premier League this season. Yakubu Sheriff Mambo’s men will aim to extend their winning streak at the Accra Sports Stadium.

Legon Cities have failed to beat AshantiGold in their last five meetings (D3 L2). Goran Barjaktarevic’s men will hope to end that streak on Wednesday.

Legon Cities have not convinced with their performances so far and an upset is unlikely. AshantiGold will earn their fourth consecutive win of the campaign.

WAFA v Hearts of Oak- Sogakope
WAFA possesses the second-worst goal tally (3) among the current top six teams in the Ghana Premier League but have proven to be one of the most efficient, earning seven points so far with two victories and a draw.

The Academy boys have also kept three consecutive clean sheets so far, highlighting the solidity of their backline. Prosper Narteh Ogum’s side will aim to earn another victory as they prepare to face Hearts of Oak.

Hearts of Oak started were in poor form heading into matchday 3 but finally got their campaign running with a 2-1 victory over Ebusua Dwarfs thanks to the outstanding free-kicks from Joseph Esso and Kofi Kordzi.

Hearts have however failed to score from open play so far and the Phobians have bought highly-rated midfielders Emmanuel Nettey and Nurudeen on deadline day to help solve the problem.

The competition between these two teams have been pretty fierce and even. Hearts of Oak have beaten WAFA twice in their last five meetings and drawn once (2W 1D 2L).

Hearts of Oak players found their shooting boots on matchday 3 but face a different threat in WAFA who have been strong defensively. WAFA are favorites to win this one.