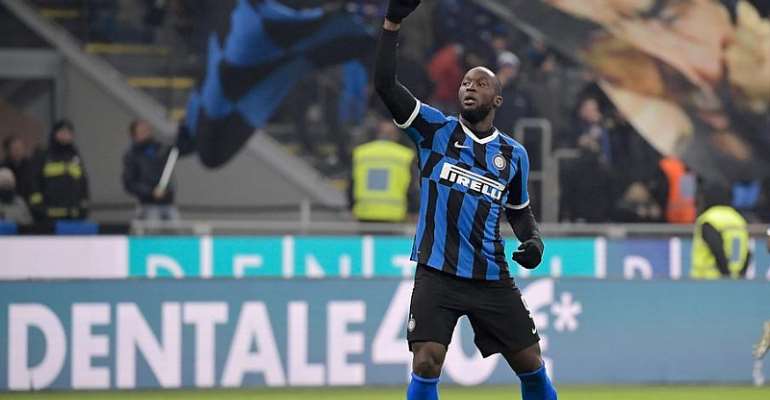 Romelu Lukaku scored after just 21 seconds as he bagged a brace in a 4-1 thumping of Cagliari that fired Inter Milan into the last eight of the Italian Cup, while Lazio and Napoli are set for a quarterfinal clash after easing past second-tier opposition.

Belgian Lukaku has looked a player reborn since moving to Italy and his double took his hot streak to six goals in his last four appearances in all competitions, with his Serie A tally standing at 14 in 19 games.

"Inter was the best choice for me, here I can grow as a player and help the club go after its goals," Lukaku told broadcaster RAI.

"I give everything for the team and that's how I play – that's what the fans like."

The 26-year-old lashed home his opener with the match barely underway and then, after Borja Valero had made it 2-0 in the 22 minute, headed home his side's third from Nicolo Barella's corner just three minutes after the break as Antonio Conte's side ran riot at the San Siro.

Their were nerves among the home fans when Christian Oliva pulled one back for the Sardinians in the 73rd minute with a fierce drive, but Andrea Ranocchia headed in Cristiano Biraghi's corner to seal the win.

The victory helped Inter bounce back after letting Juventus take top spot in Serie A with a 1-1 home draw with Atalanta at the weekend, and the return of Alexis Sanchez after an injury lay-off will also boost coach Conte.

Inter will face either Atalanta or Fiorentina, who face off on Wednesday afternoon, in the next round.

IN-FORM LAZIO STROLL
They will be joined in the quarters by Lazio and Napoli, who both cruised through with comfortable wins over second-tier sides Cremonese and Perugia to set up a mouth-watering last eight tie with each other.

Holders Lazio, who are on a club-record run of 10 straight wins in Serie A and well in the title discussion, made short work of Cremonese in their easy 4-0 victory in Rome.

The hosts were ahead in less than 10 minutes in front of a sparse crowd at the Stadio Olimpico thanks to Patric, who tapped home the opener after Cremonese stopper Michael Agazzi palmed the ball to him in the box, and the tie was done and dusted 16 minutes later when Marco Parolo bundled home the second from a Jony cross.

Simone Inzaghi made eight changes from the side that beat Napoli 1-0 at the weekend but kept Saturday's goalscorer Ciro Immobile, who took his tally to 23 in all competitions from the penalty spot 12 minutes after the break.

The impressive Jony turned provider again for the goal that rounded off the scoring, his fizzing cross from a set-piece being met with Bastos' bullet header in the final minute.

Troubled Napoli meanwhile are languishing in 11th in Serie A after winning just one league game since mid-October but eased into the quarters with a 2-0 win over Perugia thanks to two Lorenzo Insigne penalties.

Insigne struck the opening goal from the spot on 26 minutes after Mexico's Hirving Lozano went down inside the area under a challenge from Mardochee Nzita.

The Italy international added a second when Pietro Iemmello handled at a corner, with a penalty awarded following a VAR review.

Napoli goalkeeper David Ospina, whose blunder proved costly in their league loss at Lazio, then saved an Iemmello penalty before halftime following another VAR intervention.

Juventus host Udinese and AC Milan take on SPAL on Wednesday, and Roma travel to Parma on Thursday.

Torino are already in the last eight after beating Genoa on penalties last week.