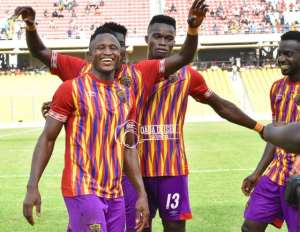 Interim coach of Hearts of Oak, Edward Nii Odoom is hoping Hearts of Oak build on their first win of the season.

The Ghana Premier League heavyweights recorded their first victory of the campaign against Ebusua Dwarfs in Accra on Sunday.

The Phobian club failed to win their first two matches.

However, in their matchday three fixture, two free-kicks scored by Joseph Esso and Kofi Kordzi sealed the win for the club with Dwarfs pulled one back through Ato Hammond.

Ahead of the matchday four fixture against WAFA, the veteran trainer is hoping his side

“I think it is great to be the head coach of Hearts of Oak,” he told Asempa FM.

“Team building is a process and I believe we can get there. Things were a bit rough for the team but we hope to build on this victory.

“If the team is not scoring goals then it’s a problem but I know we will get things done properly,” he added.

Hearts will be hosted by WAFA in the matchday four fixtures on Wednesday.