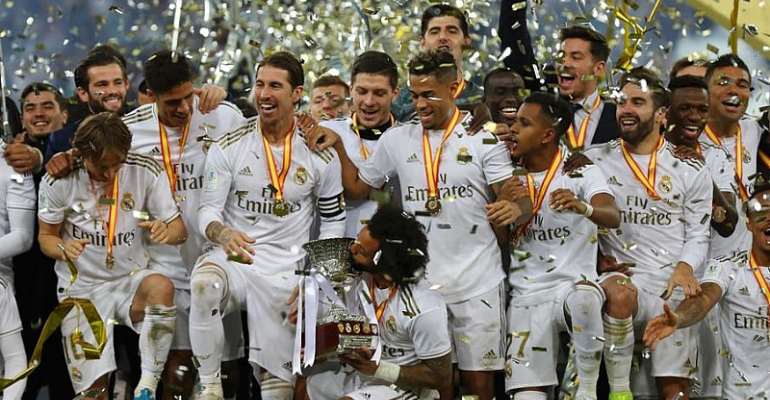 Several countries may be in the midst of their winter breaks, but the football goes on elsewhere, with Spain's biggest clubs having an eventful few days in Saudi Arabia while the race for the title continues in Serie A and Ligue 1.

AFP Sport looks back at the main talking points from the weekend:

MADRID INVIGORATED BY SUPER CUP WIN
Real Madrid's success in the Spanish Super Cup cements their status as the form team in La Liga and might make Manchester City nervous too ahead of their Champions League showdown next month.

After brushing aside Valencia in the semifinals, Zinedine Zidane's team beat Atletico Madrid on penalties in Sunday's final in Saudi Arabia to secure their 11th triumph in the competition and first trophy this season.

With Barcelona in a mess following defeat by Atletico, Real now look in a strong position to step forward in the title race while City no longer appear such a daunting prospect either. Real return to Spain invigorated.

CAN PSG STICK WITH 'FANTASTIC FOUR'?

Paris Saint-Germain coach Thomas Tuchel has found a way of squeezing four of the world's best attackers into his line-up in recent weeks and been rewarded handsomely for it.

Neymar, Kylian Mbappe, Angel Di Maria and Mauro Icardi have been in outstanding form along with their team, the "Fantastic Four" contributing 58 goals between them since the campaign began.

However, the question has always been whether Tuchel could afford to play all four together, and thereby risk leaving his team lacking balance, against stronger opposition.

To that end, PSG's display in drawing 3-3 with Monaco on Sunday will have left the coach with plenty to ponder as a Champions League tie against Borussia Dortmund comes into view.

Neymar scored twice and also forced an own-goal, but PSG were often left looking like a team cut in two when Monaco counter-attacked. They conceded three goals in a home league game for the first time since October 2010 and Dortmund – with an impressive attack of their own – will have found it interesting viewing.

While their defence remains a problem, the principality side highlighted the strength of their own attacking arsenal – Wissam Ben Yedder, Keita Balde, Gelson Martins and Aleksandr Golovin cost a combined €130 million while substitute Islam Slimani, who scored their equaliser, is on loan from Leicester City.

Monaco will now be hoping to cause PSG more problems when the teams meet again on Wednesday at the Stade Louis II, where the home side have won their last six league games.

LAZIO 'CLICK' INTO SCUDETTO MODE
Lazio coach Simone Inzaghi warned that his side have what it takes to lift a first Scudetto in two decades, as they sit third in Serie A six points behind leaders Juventus.

The Roman club beat Napoli 1-0 for a club record 10th consecutive league win to overtake Sven-Goran Eriksson's team's run in 1998-99. Eriksson led Lazio to their last Serie A title in 2000.

"What are we missing to win a Scudetto? At this moment I say very little," said Inzaghi.

Serie A top scorer Ciro Immobile brought his tally this season to 20 in the league.

"We have improved a lot, something has clicked in our heads," said Immobile. "We're reaping what we began sowing four years ago. We must keep our feet on the ground, not lose our heads."

PORTUGAL'S FERNANDES IMPRESSES SUITORS
Amid growing reports in England that Manchester United want to sign him this month, Portugal star Bruno Fernandes produced another impressive performance for his club at the weekend.

The 25-year-old scored twice as Sporting Lisbon, who are fourth in the Portuguese league, won 3-1 at a Vitoria Setubal side who had asked for the game to be called off after almost their entire squad was laid low by a flu epidemic.

Fernandes, who has eight league goals for an under-performing Sporting, has been strongly linked with a €70-million switch to Old Trafford in the January window.