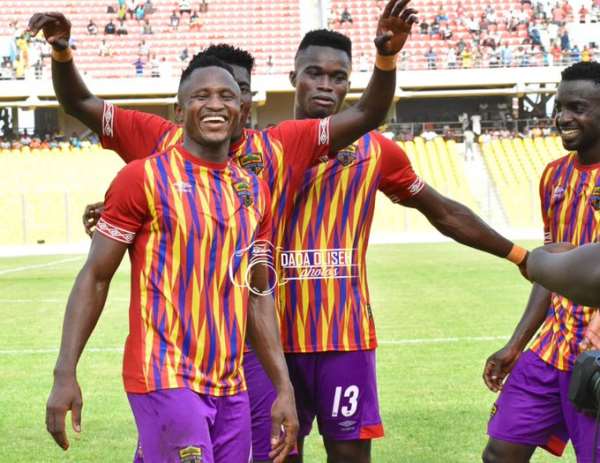 The matchday three of the Ghana Premier League produced some stunning results at the various stadia.

Accra Hearts of Oak recorded their first victory of the campaign by beating Ebusua Dwarfs 2:0 at the Accra Sports Stadium.

However, Berekum Chelsea who stunned Hearts of Oak at their own turf in matchday one continued their impressive away form by pipping Asante Kotoko by a lone goal at the Baba Yara Sports Stadium.

Here are five things we learned from the game.
1. GHPL finally back on television
The matchday of the Ghana Premier League between Accra Hearts of Oak and Ebusua Dwarfs was aired on StarTimes on Sunday.

The matchday one and two fixtures was not aired due to the FA’s inability to wrap up a deal with any television network.

However, the president of the Ghana Football Association, Kurt Okraku in an interview with Joy FM confirmed that the matchday three of the country’s topflight will be aired on television.

The Chinese television network won the bid to air the Ghana Premier League and the FA for the next five years worth $5.23m.

2. Hearts of Oak picks first points
Accra Hearts of Oak got their first win of the season after they beat Ebusua Dwarfs 2-1 at the Accra Sports Stadium.

Hearts were hammered by Berekum Chelsea in the matchday one at the Accra Sports Stadium which led the exit if Kim Grant. The woes were deepened when Medeama humiliated them 3:0 at the matchday two fixture in Tarkwa.

However, in the matchday three at their own turf, the Phobians struggled to put chances away in open play but from set-pieces, they were brilliant and they got their goals from two free-kicks scored by Joseph Esso and Kofi Kordzi while Dwarfs pulled one back through Ato Hammond.

3. Kotoko stunned by Chelsea
The biggest surprise happened at the Baba Yara Sports Stadium in the matchday three fixture. Maxwell Konadu suffered his first defeat as Kotoko coach when they were stunned by Berekum Chelsea at their own turf on Sunday.

Kofi Owusu scored the only goal in the 7th minute. Kotoko finished the game with 10 men as defender Empem Dacosta was sent off in the 76th minute.

Kotoko had made a fantastic start to the season – with two straight wins and were hoping to secure a third victory. However, Chelsea proved too strong for them on the day.

The win means Chelsea have beaten both Kotoko and Hearts away from home this season.

Yahaya Mohammed scored a brace as Aduana Stars moved to the top of the league following 2-0 win against King Faisal. The striker has now scored five goals this season.

The Royals suffered a 3:1 defeat to Kotoko at the Accra Sports Stadium in the matchday two fixtures.

The matchday four fixtures return to this weekend.