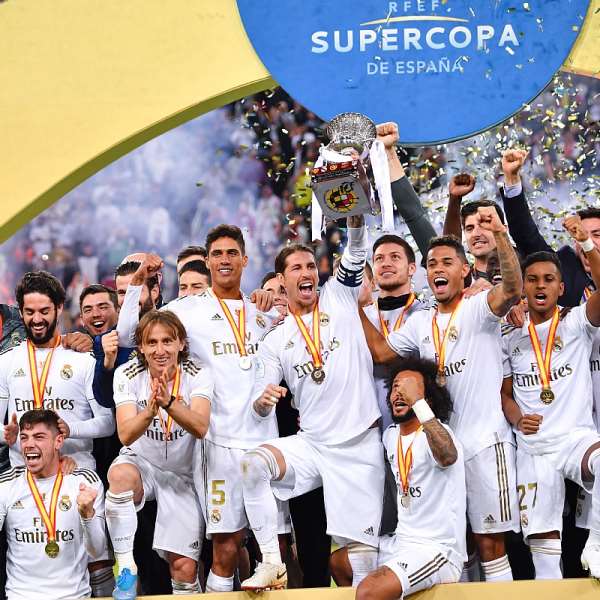 Sergio Ramos scored the winning penalty to earn Real Madrid a 4-1 penalty shootout win over Atletico Madrid following a 0-0 draw between the two sides in the final of the Supercopa de Espana on Sunday night at the King Abdullah Sports City in Jeddah, Saudi Arabia.

Both sides had their fair chances of winning it both in regular time and in extra time, but, like in the 2016 UEFA Champions League final between the city rivals, things were decided in spot kicks and, just like in Milan, Real Madrid emerged victorious.

After dominating Valencia in the semi-final using a five-man midfield, Zinedine Zidane saw no need to change and rolled out the same starting XI that put Los Che to the sword three days prior.

As for Atletico manager Diego Simeone, there was one change with Stefan Savic being replaced by Jose Maria Gimenez at centre-back.

Otherwise, the Colchoneros' starting XI remained intact from their dramatic comeback win over Barcelona in the semi-finals.

Atletico were gifted a chance at an early goal when Ramos played a pass right to Joao Felix deep in the Real Madrid half, but the young Portuguese wasted the chance with an errant effort.

Simeone's men were the better side to start, but by the midway point of the half Real Madrid began to take control, yet did not truly trouble Jan Oblak in the Atletico goal with the exception of a Casemiro header off a corner kick shortly before half time.

Both coaches made changes early in the second stanza, with Vitolo on for Hector Herrera and Rodrygo replacing Isco.

It was all there for Fede Valverde to break the deadlock midway through the half when a deflected Luka Jovic cross found the Uruguayan midfielder all alone, but the header bounced off his knee and out of play.

Alvaro Morata could also be faulted for wasting an opportunity after being brilliantly played in by Kieran Tripper, as Morata looked to sneak in a shot at the near post, only for Real Madrid goalkeeper Thibaut Courtois to make the save.

Zidane went to his bench in hopes of a late winner, as Mariano was chosen to come on for Jovic, while later Marcos Llorente was on for Renan Lodi for Atletico.

Stoppage time yielded one last chance, with Rodrygo firing right at Oblak, so extra time was called upon to try to settle matters.

Simeone was first to make a change in the extra frame, as Savic replaced Gimenez and Joao Felix made way for Santiago Arias, while Vinicius was substituted on for Toni Kroos.

Oblak was called upon to save back-to-back shots from Luka Modric and Mariano, which was then followed by the biggest spark of the entire match when Fede Valverde clipped Morata from behind with Courtois only to beat, and the red card was quickly brandished, along with a flood of yellow cards during the ensuring fracas.

The final minutes turned into the Courtois Show, as the big Belgian made a number of big saves to keep it scoreless and force the penalty shootout.

From the spot, the ghosts of the 2016 UEFA Champions League final would surface, as Saul hit the post and Thomas Partey saw his attempt saved by Courtois.

Meanwhile, Zidane's men made all four of their penalties, including the clincher from Ramos to secure the cup.