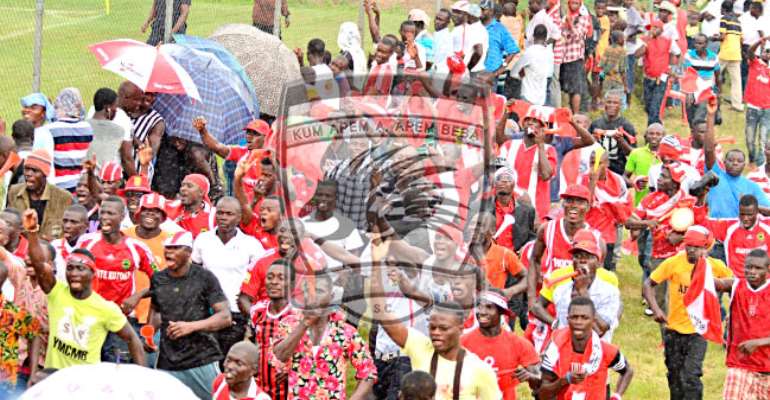 A management member of Asante Kotoko, Nana Kwame Dankwah has dismissed rumours suggesting that a Kotoko fan has been pronounced dead.

Kotoko were facing Berekum Chelsea in Match Day three of the Ghana Premier League this afternoon, and as is customary, police and other security personnel were deployed to the stadium to ensure the safety of life and property.

However, the game took an unfortunate turn when Kotoko supporters allegedly threw projectiles on the field during their shock 1-0 defeat to Berekum Chelsea, halting the Premier League match for several minutes on Sunday.

A footage sighted by Modernghana.com has a man, clad in a Kotoko replica jersey, in a pool of blood with onlookers shouting that he (the victim) had been shot by a police officer.

The man was then seen being carried into an ambulance and conveyed to a nearby hospital.

Reacting to the news, Nana Kwame said, "The fan who was hit by the police is still at the emergency unit of the Komfo Anokye Teaching Hospital.

"He is not dead as been speculated," he added.
Video below...