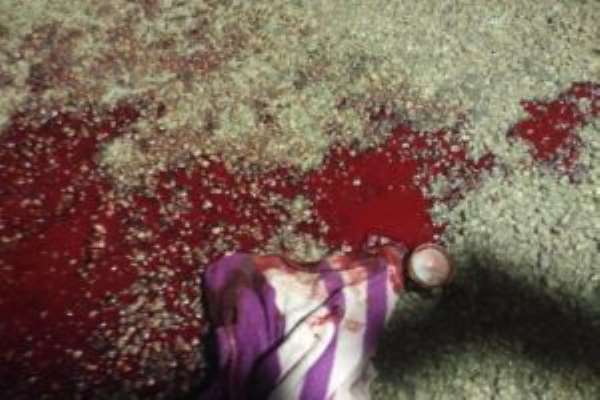 A fan of Kumasi Asante Kotoko is feared dead after being shot in the stomach by police following the Porcupines' shock defeat to Berekum Chelsea on Sunday.

The supporter wearing the jersey of the Kumasi-based club collapsed on the floor after being shot with blood oozing out from his stomach area.

But other reports claim the supporter was shot in the eye after police fired rubber bullets to ward off supporters who were trying to approach referee Charles Bulu following the defeat in Kumasi.

Supporter gathered in the exit area rushed to help the injured man before lifting him to be taken to the Komfo Anokye hospital where several accounts claim he was dead on arrival.

Fans could be seen clutching their heads after the gun was fired at the direction of the supporter who was immediately carried in a police ambulance to the hospital.

Blood and body parts could be seen on the floor as the supporter was taken to the hospital following the shooting incident which left supporters of the home side in tears.

Some supporters who were witnessing the event could he heard saying in the local language that the fan had been killed by the police.

Even though the current status of the supporter is unknown, wailing witnesses of the incident had already concluded that the fan was dead. This cannot be independently confirmed.

Furious Kotoko supporters had already put the club into trouble with the Disciplinary Committee of the Ghana FA after their supporters threw projectiles on the field during their shock defeat to Berekum Chelsea.

The incident halted the Premier League match for several minutes on Sunday.

Angry supporters of the Porcupine Warriors were furious over decisions of the referee in their match against the visiting which led to some throwing stones and sachet water directed at the match officials.

Some also tried to force a gate to the pitch open before security officials intervened to halt the action which could have spiralled out of control in the match.

Kotoko lost for the first time this season after falling to a surprise 1-0 defeat at the Baba Yara Stadium on Sunday.

The Porcupine Warriors were hoping to continue their winning run but a seventh-minute strike by Kofi Owusu ensured that Chelsea earned the famous win.