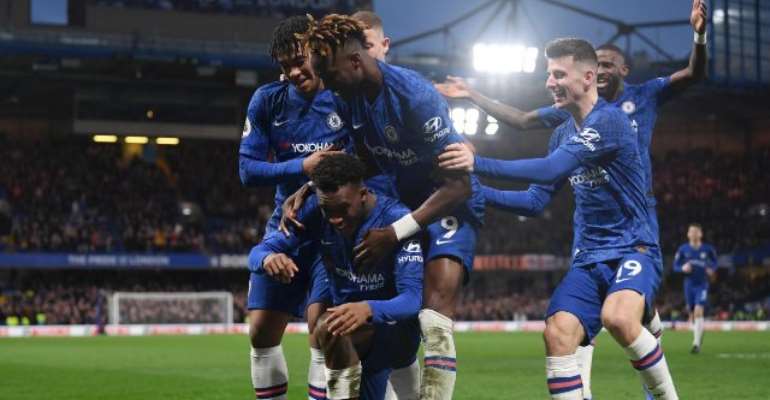 Callum Hudson-Odoi scored his first Premier League goal as Chelsea returned to winning ways at Stamford Bridge and consolidated their top-four place with a convincing victory over Burnley.

The Blues came into the game off the back of consecutive home defeats to Bournemouth and Southampton and a third straight loss would have equalled their worst record since 1993. That never looked likely to materialise, however, despite the fact Burnley's Jeff Hendrick had a goal ruled marginally offside after a VAR check in the 19th minute.

Chelsea led seven minutes later when Jorginho converted from the spot after Willian was upended by Matt Lowton, and in the 38th-minute teenager Reece James' cross was finished by Tammy Abraham's header, though Nick Pope ought to have made the save.

In the absence of Christian Pulisic, Hudson-Odoi kept his place in the line-up after scoring in the 2-0 win over Nottingham Forest, and he marked the occasion with a fine performance and first league goal, slotting home from Cesar Azpilicueta's deep delivery almost immediately after the restart.

Brimming with confidence, the 19-year-old linked up on the right with fellow exciting prospect James time and time again, and but for Burnley shot-stopper Pope, desperate to make amends for his earlier mistake, it would have been a much more handsome victory for the hosts.

Chelsea remain five points clear of fifth-placed Manchester United - who thrashed Norwich 4-0 - while Burnley, now on a run of four straight defeats, are four points above the drop zone with 18th-placed Bournemouth yet to play this weekend.