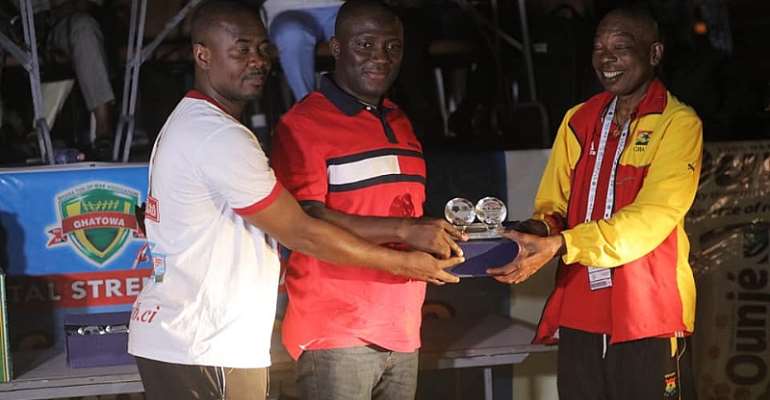 Hon. Mohammed Adjei Sowah, the Mayor of Accra has been honoured for his contribution to grassroots sports development and promotion in Ghana.

Dreamland Sports Plus, the popular sports events and management outfit conferred on the Mayor the accolades and presented him with a special plaque.

Mr. Emmanuel Olla Williams, CEO of Dreamland Sports Plus and youth coordinator of the Ghana Olympic Committee (GOC) who joined the technical director of the National Sports Authority (NSA) Mr. Saka Akwei at Bukom to present the plaque praised the Mayor for his motivation and encouragement to the youth of Accra.

According to Williams, the Mayor is a sports enthusiast who wants the youth to find interest and jobs in sports.

He expressed that events like the Coastal Strength Challenge (tug of war) and ampe, as well as swimming, cycling, boxing, basketball, football and other games, are organized to create attention and affection, apart from entertaining the people.

Three employees of the Accra Metropolitan Authority (AMA) were also honoured for supporting the Mayor with their hard work, zeal and dedication.