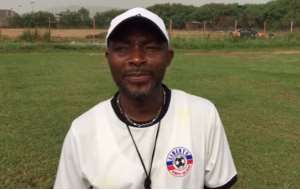 Head coach of Liberty Professionals, David Ocloo, has warned Medeama Sporting Club that their unbeaten start to the league season will be halted by Dansoman-based team this weekend at the Karl Reindorf Park.

The two teams clash in the biggest match of Week 3 with either team hoping to secure victory for their own respective reasons.

Medeama are chasing their 3rd straight victory while Liberty are seeking their first win of the season after drawing with Legon Cities FC in Week 1 and Berekum Chelsea in Week 2. For David Ocloo, that victory will come to his team on Saturday.

“We have prepared well and so, I am expecting a positive result. I see nothing but a victory for us. I am very confident that we are going to be the team that first stops Medeama this season.”

Despite the absence of a victory to their name this season, Ocloo is happy with the evolution of the team and is confident that they will soon start reaping the rewards of the work being put in by the players.

“I say that the team is a work in progress and so far, we have done a lot of good work and I am sure that will get all the points on Saturday. I urge all Liberty fans to come to the match and they should nothing but a win.”

The last time the two teams met at the Karl Reindorf Park in Dansoman, the match ended in a 1-1 draw with Simon Zibo scoring for Liberty while Kwame Boateng found the net for Medeama.