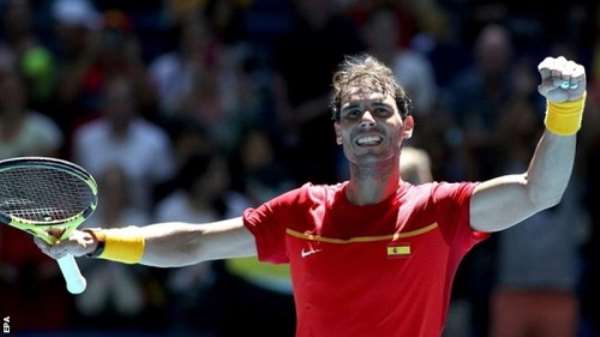 Rafael Nadal came back twice from a break down against Japan's Yoshihito Nishioka to put Spain into the ATP Cup quarter-finals in Australia.

Japan must win the doubles rubber to stay in contention for a last-eight spot as one of the two best runners-up.

Davis Cup champions Spain have won all three of their group matches.

An unusually sluggish Nadal was made to work hard against world number 72 Nishioka, making 19 unforced errors and dropping serve twice in the first set.

It was the first time Nadal, who has not dropped a set at the tournament yet, had played in the hot conditions of the Perth day session.

"It's the first time I played under these heavy conditions, so the feeling on court is completely different," said Nadal, who will be seeking to equal Roger Federer's record of 20 Grand Slam singles titles at the Australian Open, which starts on 20 January.

The ATP Cup is a new 24-nation knockout tournament that has been set up by the men's professional tour to kick off the 2020 season.

It features six groups of four teams, who each play three round-robin ties in an event played across Sydney, Brisbane and Perth.

Among the countries who have already qualified for the quarter-finals are Great Britain, who face hosts Australia on Thursday (starts 23:00 GMT Wednesday).

Novak Djokovic's Serbia and Russia are also through to the knockout stage, which will be played in Sydney.