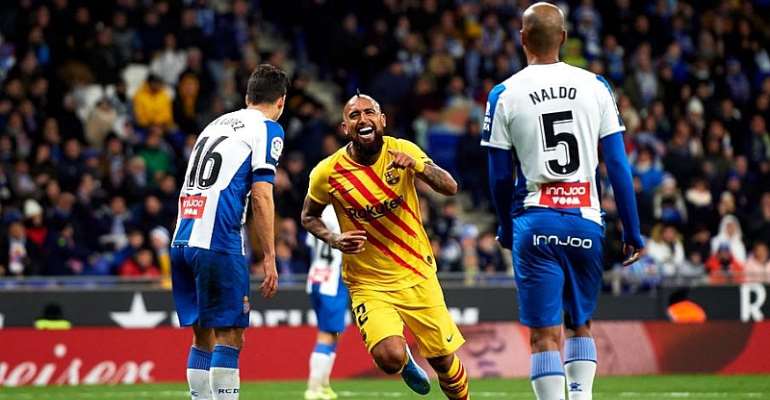 La Liga returned following its winter break and there was no shortage of drama as league leaders Barcelona were held by basement club Espanyol.

Real Madrid appear on the verge of yet another coup signing from Brazil's youth ranks while one referee made up for lost time as he dished the cards out.

Here are the talking points from the weekend's action in Spain:

It is not often a player sues their current club and lives to tell the tale. However, representatives of Arturo Vidal have pushed ahead and filed complaints against Barcelona for 2.4 million euros ($2.69 million) in unpaid bonuses.

Normally a lawsuit would signal the end of a relationship, but with the La Liga leaders 1-0 down at bottom of the table city neighbours Espanyol at halftime, coach Ernesto Valverde called on the former Bayern Munich and Juventus midfielder.

Vidal's entrance changed the game, helping wrestle back control for Barca, who equalised through Luis Suarez before Vidal himself put them 2-1 in front.

They were unable to hold on following Frenkie de Jong’s red card as Wu Lei rescued a point for the home side, handing the impetus back to Real Madrid in the title race.

REAL CONTINUE TO GO BRAZILIAN
Real drew level on points (40) at the summit as they saw off local rivals Getafe 3-0 and it appears that on the pitch is not the only place they are ahead of the curve.

Sports daily Marca on Monday contained a report that the 13-time European champions are to continue their new policy of signing Brazil's best youngsters with Flamengo midfielder Reinier Jesus set to move to the Spanish capital when he turns 18 on January 19, for a reported 30 million euros.

The shift away from big-name 'Galactico' signings represents Real's determination not to miss out on the next Neymar, whom the club tried to sign back in 2013 before he opted to join Barca.

Over the past two years they have snapped up Vinicius Junior and Rodrygo – both 18 – and Reinier appears to be the next Brazilian from the production line set for the Bernabeu.

NOT JUST PLAYERS WHO SUFFER FROM RUSTINESS
Referee Antonio Mateu Lahoz is known as one of the more flamboyant officials in Spain and is renowned for not being shy of giving it back to players when they argue with him on the pitch, while he usually likes to let the game flow.

However, after a short mid-season break, perhaps it is not only the players who might be feeling a little rusty and out of practise as the Valencian struggled to control Alaves' scrappy 1-1 draw with Betis on Sunday.

He dished out ten yellow cards and one red (with the assistance of VAR) over the course of the 90 minutes, awarding 33 fouls in total – ensuring the game never got going, much in contrast to his usual style. ($1 = 0.8931 euros)

No retreat, no surrender — Ablakwa chases gov't for cost of ...
8 minutes ago

Akufo-Addo, Bawumia responsible for 60% of Ghana’s total pub...
9 minutes ago