GHPL: Kotoko Climb From Behind To Beat Legon Cities FC 3-1 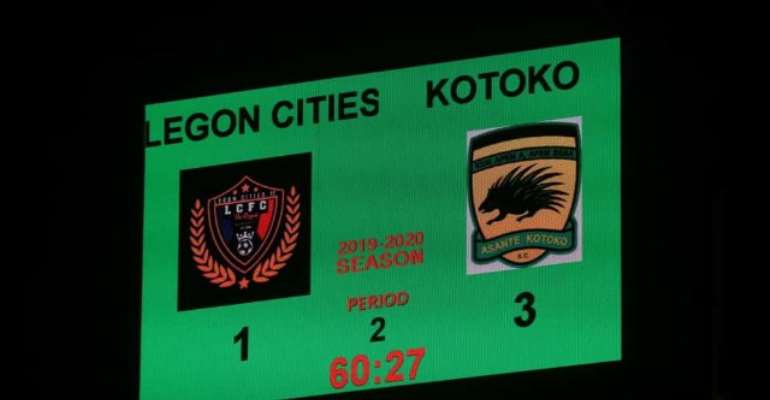 Kumasi Asante Kotoko climbed from behind this evening to post a 3-1 win over Legon Cities FC in a Match Week 2 fixture of the 2019/2020 Ghana Premier League season.

The two clubs locked horns at the Accra Sports Stadium in what has gone down as the first game of the season to be played under floodlight.

As the build-up to the match forecasted, the two sides started with some high intensive football and went on some decent runs in the early minutes of the game.

Following persistent attacks by Legon Cities FC, they finally took the lead on the 10th minute courtesy a strike from Papadopoulos Panayotis.

That equalizer kindled the big club status in the Porcupine Warriors who gradually took control of the match.

A little after the half-hour mark, Kotoko's hard work paid off as Augustine Okrah scored with a cheeky effort.

Though the two teams created other chances, there were no other goals as the first half ended one-all.

The entertainment continued at the break with popular dancehall artiste, Shatta Wale thrilling fans with a short performance.

After recess, Asante Kotoko came out strong and continuously pounced on their opponent in search of the goal that will shoot them into the lead.

Maxwell Konadu's men got their reward on the 51st minute when Emmanuel Gyamfi fired in a shot from close range.

Shortly after, Sogne Yacouba went on a solo run on the flanks before lifting a good cross into Legon Cities FC's penalty area.

The lobbed cross eluded everybody but found Emmanuel Gyamfi who headed his effort into an empty net to complete his brace while handing Kotoko a two-goal cushion.

Though Legon Cities FC tried to get back into the match, Kotoko smartly managed time to ensure they protected the 3-1 lead.

The Reds return to Kumasi with all 3 points while climbing to the top of the Ghana Premier League standings.