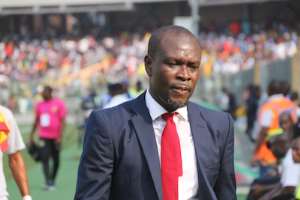 The Ghana Football Association dissolved all technical teams of all male and female national teams on Thursday meaning Kwasi Appiah is no more the head coach of the Black Stars.

Ghana Sports Online can exclusively confirm that former Ghana captain Charles Akunnor has been handed the head coach job on an interim basis.

Akunnor, 45, was appointed as deputy to Kwasi Appiah in late October to replace former Cameroon assistant coach Ibrahim Tanko who was axed by the then head coach a month earlier.

The former VfL Wolfsburg skipper has considerable coaching experience in the Ghana having managed two of the most glamorous clubs in the West African nation. Akunnor managed Hearts of Oak before heading to bitterest rivals Asante Kotoko via Dreams FC and AshantiGold.

It is unknown whether Akunnor would be in charge till Ghana’s next official game or a substantive coach would be appointed.

KWASI APPIAH AND C K AKUNNOR
Kwasi Appiah opted to work with Akunnor after reportedly falling out with his then assistant Ibrahim Tanko whom he accused of backbiting. Tanko was relieved of his position as assistant coach just before he took Ghana’s Olympic Team to the U23 AFCON in Egypt.

Some Ghanaian fans questioned the Ghana FA’s decision to maintain Kwasi Appiah after he failed to achieve the targets set within his contract. Kwasi Appiah first removed Maxwell Konadu as his deputy to make way for Ibrahim Tanko before later doing away with him to hand the opportunity to Akunnor.

During Akunnor’s spell as assistant to Appiah, he helped the team to beat South Africa 2-0 in Cape Coast before playing a vital role in Ghana’s 1-0 away win over Comoros.

C K AKUNNOR IN THE DUG-OUT
After impressing at Dreams FC in the Ghana Premier League the former Wolfsburg man went on a rescue mission to help AshantiGold to beat the drop in a dignified league season. His performance with the Miners propelled him to secure a lucrative deal with Asante Kotoko where he guided the Porcupine Warriors to the group stages of the CAF Confederation Cup.

He was linked with the vacant Guinea national team job in September but he missed out by a whisker.

Akunnor has been a key figure in Ghana football captaining the Ghana senior national team – the Black Stars, before cutting his teeth with club coaching with Sekondi XI Wise.