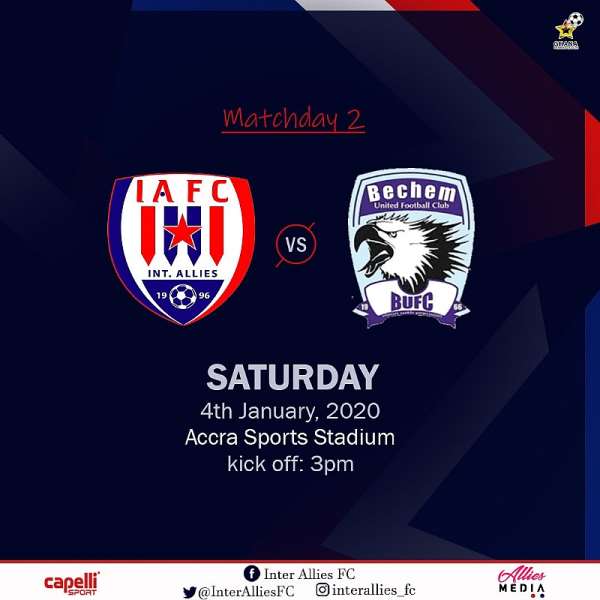 The Match Week 2 of the 2019/2020 Ghana Premier League season comes off this weekend with Inter Allies expected to lock horns with Bechem United in the only match scheduled to be played on Saturday, January 4, 2019.

The two top-flight clubs earned contrasting results from the opening weekend of the league and will be gunning for the available 3 points on the matchday for different reasons.

At the Nana Agyemang Badu Park last Sunday, Inter Allies were thrashed 4-0 by Aduana Stars in their first match of the campaign. Then elsewhere, Bechem United stood their grounds at home and cruised past Elmina Sharks with a 2-0 victory.

Now billed to go to battle on Match Week 2, the odds are a bit shaky owing to the fact that the two clubs go into the game with different motivations.

While Inter Allies want to win to get their season back on track, Bechem United believes after hitting the ground running in the opening weekend of the league, there is no reason why they should stop.

Player to watch:
Bechem United’s Kwadwo Asamoah was outstanding in the game against Elmina Sharks and emerged as the Man of the Match after scoring his team’s first goal that inspired them to pick all 3 points. Ahead of the Inter Allies meeting, the attacker could decide the match if he displays a similar form.

Match venue and kick-off time:
The encounter between Inter Allies and Bechem United will be played at the Accra Sports Stadium on Saturday and will kick off at 15:00gmt.