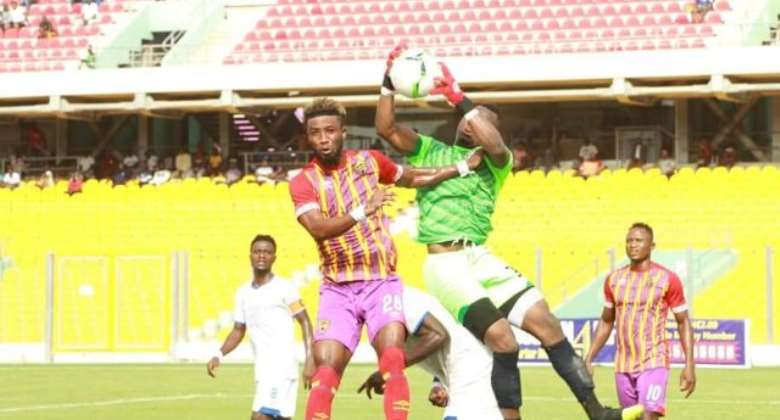 Starting on Friday night, Asante Kotoko will be in Accra to take on Legon Cities FC. Their arch-rivals, Hearts of Oak will begin life after Kim Grant with an away clash against Medeama. Other games to keep an eye on including Ashanti regional derby between King Faisal and Ashanti Gold, Great Olympics’ clash with Aduana Stars and Berekum Chelsea versus Liberty Professionals.

Favourite Asante Kotoko began their campaign with a slender 1-0 win over Eleven Wonders. Justice Blay’s second-minute effort was enough to hand Kotoko a winning start and they will be hoping to make it two straight wins.

But they will have to improve as they come up against a Legon Cities FC side high on confidence after their impressive away performance against Liberty Professionals which earned them a 2-2 draw.

Off the field, Legon Cities have set tongues wagging with their signings and marketing skills. They have managed to secure Dancehall artiste Shatta Wale to perform at the game. Wale has also endorsed the club. The move is to boost attendance at the Accra Sports Stadium for the match.

Inter Allies v Bechem United – Accra
Inter Allies come into this tie in search of their first win of the season after a huge thumping in their opening game. They conceded four goals without reply to Aduana Stars. Yahaya Mohammed was the chief orchestrator, grabbing the first hat trick of the season.

Bechem United in contrast, came out with a 1-0 victory over Elmina Sharks courtesy Kwadwo Asamoah’s goal. In their last two meetings, both sides have managed 1-0 wins.

Inter Allies have been in terrible form since the start of the NC special competition with only two victories in 15 games and that run looks set to continue. Bechem United may not have the home advantage but the terrible start of Inter Allies provides the perfect opportunity to obtain maximum points.

Medeama SC v Hearts of Oak – Tarkwa
Hearts of Oak have been in the news for all the wrong reasons in the past week. Losing the President Cup to Kotoko, a 1-0 home loss to Berekum Chelsea and the sack of Kim Grant on Monday, sending shockwaves among the fans and neutrals alike. Grant has joined 18 other managers to be sacked by the club in the last decade showing the impatience exhibited by the board.

Kim Grant was sacked after the first defeat of the season.

A substantive manager Edward Nii Odoom has put in charge. He will be desperate to stabilise the ship and win back the love of disgruntled fans starting this Sunday against Medeama in Tarkwa.

Medeama have promised to compound the woes of the Phobians. They are in great form to do so after a comfortable 3-1 win over Ebusua Dwarfs last weekend. Ebenezer Ackhabi, Prince Opoku Agyemang and Nana Kofi Babil may have scored the goals but the Isaac Agyenim Boateng stole the show by providing all three assists.

Hearts of Oak have failed to win any of their last four league games against Medeama (D2 L2) and that looks set to worsen.

King Faisal v AshantiGold – Kumasi
King Faisal marked their return to the top flight with a humbling defeat to Dreams FC. They got battered 4-1 by Dreams FC in Dawu but they will be aiming to get one over AshantiGold in Kumasi.

The Miners made a brilliant start as they posted a convincing 3-0 victory over Great Olympics in Obuasi. The Miners are highly fancied to win the league title this season and are expected to overcome Faisal.

Both teams have failed to score against each other in the past two games but that run is expected to end as King Faisal showed their lack of quality, especially at the back while Ashgold demonstrated their attacking prowess on the opening day of the season.

At the Accra Sports Stadium, Jonah Attuquaye silenced the Hearts of Oak fans by scoring the only goal of the game to clinch a surprising victory for Berekum Chelsea. The victory serves as a huge boost to the confidence of the Blues as they prepare to face Liberty Professionals in a game that has produced a number of goals in recent seasons.

Liberty were in a tight corner during their first game against Legon Cities FC but goals from Elvis Kyei Baffour and Michael Ampadu secured a draw for the Dansoman based club. In their last three (3) league meetings Berekum Chelsea have come out on top (2W 1L).

Chelsea earned a narrow 2-1 win in their most recent fixture. They are favourites to secure all three points in this tie as they are better placed in form in comparison to Liberty.

Eleven Wonders v Dreams FC – Techiman
The two teams come into the fixture on opposite ends from the opening matchday. Wonders were beaten by Kotoko away from home while Dreams FC made light work of King Faisal 4-1.

In the last meeting between the two teams, Dreams FC ran away with a marginal 1-0 win. This may well change as most Premier League sides have shown the trend of successfully defending their home turf and the terrific start by Dreams FC will not be enough to grab an away victory.

After a 1-0 loss to Bechem United on opening day, Elmina Sharks will be out to please their fans on home soil as they prepare for a clash against Karela United who also got off to a slow start at home with a loss to WAFA by a lone goal. The two teams will look to get their season running on Sunday in Elmina.

In the last encounter in 2018, both sides failed to grab a goal. Karela may have reached the NC special competition tier-one final last year but their start to this campaign is a cause for concern and this fixture may bring further concern as they do not possess the home advantage.

Great Olympics will hope to put the 3-0 thumping in Obuasi behind them and grab their first three points of the campaign as they prepare for a showdown with Aduana Stars.

Aduana Stars, in contrast, would look to build on their solid start from the opening day. Yahaya Mohammed made the headlines for scoring a hat-trick for Aduana Stars as they thrashed Inter Allies.

Aduana have hugely dominated and avoided a defeat (W3 D1) in the last four meetings. Olympics have been weak at home to Aduana Stars as well, losing the last two meetings. Oly Dade have to produce something really special to get a positive result against their upcoming opponents and with Yahaya in the mix, another defeat seems inevitable.

WAFA v Ebusua Dwarfs – Sogakope
WAFA will look to make it two wins from two when they welcome Ebusua Dwarfs to Sogakope. The Academy boys needed only a goal to claim all three points from Karela on their first away trip of the season. Ebusua Dwarfs, however, failed to take advantage of home court as they suffered a 3-1 defeat at the hands of Medeama. Dwarfs will be aiming to turn things around at Sogakope.

Both sides have reached a stalemate in their last four meetings with two wins apiece. WAFA, however, came out on top in their last home game against the Dwarfs and the poor start from their opponents provides the perfect opportunity to gain maximum points. WAFA are favourites for this tie and Dwarfs will need something spectacular to leave the Volta region with a victory.