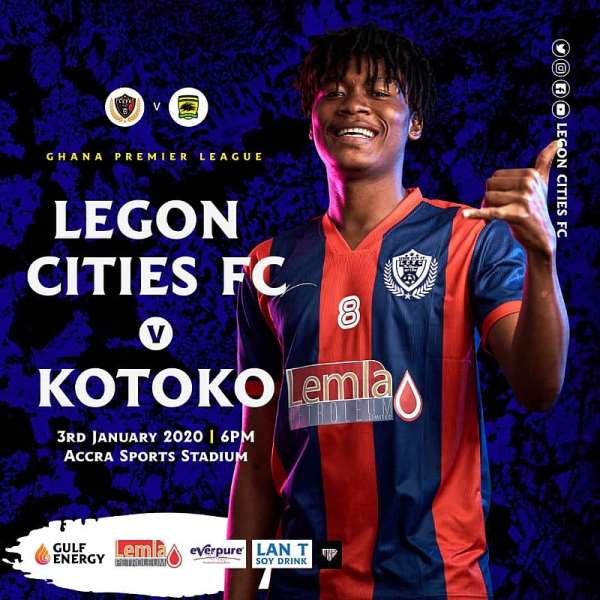 It will be a cracking showdown at the Accra Sports Stadium on Friday, January 3, 2020, when Legon Cities FC welcome Asante Kotoko for a Match Week 2 fixture of the 2019/2020 Ghana Premier League season.

The Porcupine Warriors were fortunate to play their first match at home at the Baba Yara Sports Stadium and took full advantage as they recorded an important 1-0 win over Berekum Chelsea.

Elsewhere at the Dansoman Carl Reindolf Park, Legon Cities FC was held to a 2-2 draw by Liberty Professions when the rebranded club visited the venue.

Ahead of Match Week 2 of the Ghana Premier League this weekend, Kotoko has been billed to play as a guest to Legon Cities FC in the capital city.

It will be the first match to be played on a Friday night as the Ghana Football Association (GFA) and the Ghana Premier League Committee look to treat fans to exciting games at night.

In a pre-match interview to the clash, Legon Cities FC coach Goran Barjaktarevic has stressed that his team is going for the win against the record league champions.

“I play every game to win. Of course, I have a lot of respect for Kotoko and I know they have good players but am very confident of my players. Like I said I respect each opponent but I want to win against every one of them”, the gaffer told LC TV.

Maxwell Konadu, on the other hand, has noted that his Kotoko side will as demanded by the status of the club control and cruise past the home team at the end of the match. He opines that they have worked on their scoring in training and should be able to score more than they did last weekend.

“We will make sure that we control the game and we will try to win the game for our fans”, coach Maxwell Konadu said.

To spice the match up and offer entertainment to fans, Legon Cities FC has confirmed that they have reached an agreement with dancehall artiste Shatta Wale to perform on the matchday.

The encounter will come off at 18:00gmt tomorrow night at the Accra Sports Stadium.

Even with the pedigree of Kotoko, the build-up to the match indicate that it will be tough for both clubs.