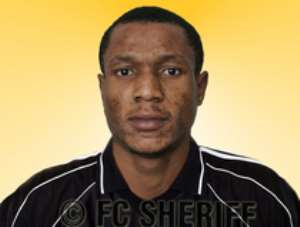 ...for struggling Kfar Sava Samuel Yeboah's match winner against Betar Jerusalem on Saturday was the Ghanaian striker's sixth goal in 12 games since joining Hapoel Kfar Sava from FC Serrif of Moldova in January.

Yeboah, 21, who also scored match winners against Kfar Sava's fellow strugglers Sakhnin and Upper Nazareth, heads a trio of Ghanian players who have changed the club's fortunes in recent weeks and brought it back from the dead to the brink of Premier League survival.

Along with Emmanuel Pappoe and Yahuza Abubakri, Yeboah could be a gold mine for Kfar Sava. Pappoe will play with Ghana at the World Cup this summer, while Abubakri is fighting for a place on the squad as a back-up to Chelsea's Michael Essien. Yeboah, who has already appeared for Ghana's under-21s, could also earn himself a ticket to Germany if he continues at his current level.

While Ohana has reaped the fruits, the credit for bringing the Ghanian trio to Kfar Sava goes to his predecessor Elisha Levy.

"After only one training session, it was clear to me that I would sign them," Levy says of Yeboah and Abubakri, who followed Pappoe who joined earlier in the season from Ashdod SC. "They are both young and talented and Kfar Sava clearly isn't going to be their last stop."

Kfar Sava hasn't had much success with homegrown players in recent years, but in addition to its Ghanaian contingent, it has also hit the nail on the head with Brazilian defender Douglas Da Silva. The 22-year-old has been rock solid at the heart of Kfar Sava's defense - in his absence, the team lost 3-1 to Sakhnin in the State Cup - and while owner Eli Tabib has the player signed for another year with an option for a further four, like Yeboah, he is destined for bigger things