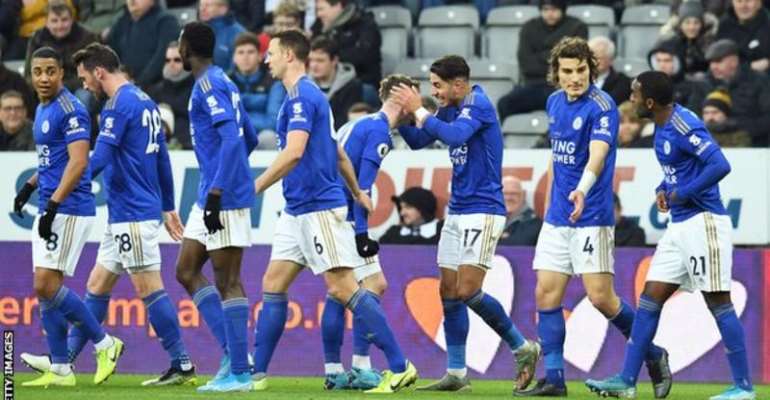 Leicester's impressive season continued with a dominant win at Newcastle that keeps them second and inflicts a third straight defeat on Steve Bruce's side, who played almost the whole second half with 10 men following a string of injuries.

The Foxes, without the division's leading goalscorer Jamie Vardy for the second successive game, took the lead through Ayoze Perez, who kept his cool to finish well against his former side after being gifted possession by a horror pass from Florian Lejeune.

The Newcastle defender was culpable again just a few minutes later as his weak clearance was claimed by the away side and fed to James Maddison, who rifled in a thunderbolt of a second from the edge of the box.

The home side, whose best effort fell to a woefully ill-equipped and confidence-shorn Joelinton to waste, were unable to respond and would have lost by much more but for an inspired display from goalkeeper Martin Dubravka.

But the keeper was powerless to prevent substitute Hamza Choudhury scoring a superb third, curling in his first goal in senior football from the edge of the box.

It was the final blow for the home side, whose afternoon started badly and only got worse. Both Jetro Willems and Javier Manquillo were forced off through injury at the end of the first half, before Fabian Schar followed them at the start of the second, leaving them with 10 men following the half-time substitution of the also injured captain Jonjo Shelvey.

Newcastle remain in mid-table but their points cushion above the relegation zone is down to six.

There are no such concerns for Leicester, though, with this win giving them a four-point advantage over third-placed Manchester City, who host Everton later on Wednesday.

It was also Leicester's seventh away Premier League win of the season - only unbeaten leaders Liverpool have managed more.