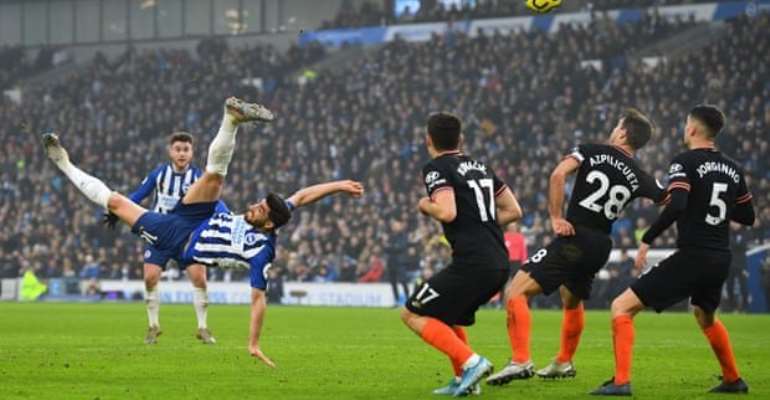 Brighton & Hove Albion forward Alireza Jahanbakhsh scored with a brilliant bicycle kick in the second half to cancel out Chelsea defender Cesar Azpilicueta's opener in an entertaining 1-1 draw in the Premier League on Wednesday.

The result at the Amex Stadium helped Brighton end a run of nine straight league defeats by Chelsea stretching back to 1983 while Frank Lampard's side were left to rue the missed chance to seal back-to-back league wins for the first time since November.

Left-back Azpilicueta celebrated his 100th start as Chelsea captain with the opening goal, guiding the ball home from close range in the 10th minute after Tammy Abraham's shot was blocked near the goal line by Brighton's Aaron Mooy following a corner.

Substitute Jahanbakhsh then produced a goal for the highlight reels with six minutes left on the clock, with a superb overhead kick that flew into the bottom corner giving Chelsea goalkeeper Kepa Arrizabalaga no chance.

Arrizabalaga had earlier denied another Brighton substitute in Aaron Connolly, who turned and shot from close range while Chelsea also had several chances to close out the game.

Earlier, Chelsea had stepped off the gas pedal following their goal and nearly paid the price before the break but Arrizabalaga produced another acrobatic save to deny Leandro Trossard.

Seven electrocuted, five others injured at Amanfrom
56 minutes ago