Ekow Amoasi Writes: Twenty Coaches In The Last Decade? Is Hearts of Oak Such An Unambitious Club? 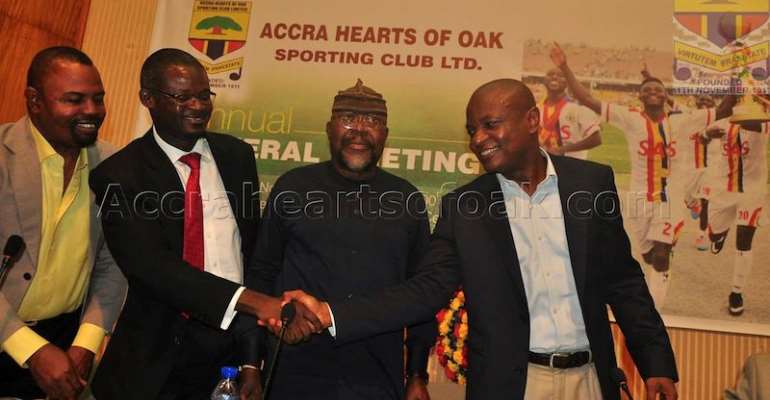 Stunned? No! Astonished? No! Unexpected? No!.
Accra Hearts of Oak on Tuesday, December 31 showed head coach, Kim Grant the exit for losing their first match of the 2019/20 Ghana Premier League season to Berekum Chelsea at the Accra Sports Sports. Edward Nii Odoom has been named the new Accra Hearts of Oak head coach following the departure of Director of Football, Kim Grant. The former Tema Youth coach was originally appointed the assistant to then Hearts of Oak caretaker coach, Henry Wellington in 2018.

When the former Elimina Sharks technical director was named as the head coach of the club in December 2018, supporters of the clubs were of the expectation that the former Charlton Athletic star will aid them end their nine years trophyless jinx.

The club was in the right direction under former Managing Director, Mark Noonan. Under the auspices of the American, Hearts of Oak secured a massive deal with global kit manufacturers, Umbro. The Pobiman Project which was something that the board of the club seem not to care about was revived under Mr Noonan.

Kim Grant, who was aware of the pressure at the club hit the grounds running by bringing in players to help in his quest to win something meaningful for the club. However, Mr Grant was unfortunate because football activities came to a halt following the airing of the 'Number 12' by Anas Aremeyaw Anas.

Due to the lack of football activities, Mark Noonan left his position as the Managing Director of the club and wished them the best of luck.

However, Hearts of Oak competed in the Special Competition organized by the Normalization Committee of the Ghana Football Association. The club exhibited some impressive performance under Kim Grant. However, in the semi-finals of the competition, Asante Kotoko continued their impressive run by defeating their sworn rivals Hearts of Oak 5-4 on penalties following a 1-1 draw in the semi-final at the Accra Sports stadium to book a place in the finals of the competition.

Despite the defeat, Kim Grant’s men emerged the better team in the second half, pummeling the Kotoko area with a barrage of attacks. But a combination of feeble shots and at times, great piece of defending from the Porcupine Warriors, kept the Phobians at bay.

Kotoko under CK Akunnor went ahead and won against Karela United to book a place in the CAF Champions League which they failed to play in the group phase of the competition.

Ahead of the start of the 2019/20 Ghana Premier League, it was reported that Mr Grant does not hold the required certificate that grants him permission to coach in the Ghana topflight. The technical directorate of the Ghana FA insisted that coaches who will coach in the Premier League must have CAF License A certificate. However, Kwame Opare Addo, who is the Communication Director of the club denied the reports indicating that Mr Grant has the required certificate to be the head coach of the club.

In the first list released by the Ghana Football Association of coaches who have the required certificate to coach in the Premier League, Mr Grant's name was omitted. Surprisingly, the Kurt Okraku's administration released another list of coaches with the name of Kim Grant included.

Despite the back and forth, there was a clear glimpse of what Kim Grant wanted to do with the club. The club engaged in several friendly matches before and after the Normalization Committee's special competition. But the question still remain that which club sack their coach for losing their first home match of the season?

It is obvious that since the appointment of Frederick Moore as the replacement of Mark Noonan as the Managing Director of the club, the club have lost control and don't the direction they are heading to. The past and present board of the club seems to be toothless and have consistently disappointed themselves and the supporters of the club.

Following the appointment of Japanese-American gaffer, Kenichi Yatsuhashi, on an initial two-year deal ahead of the 2015/16 Ghana Premier League season, the club looked to have regained its support base and its pride. Kenichi undoubtedly helped to revive the Ghana Premier League and brought some excitement in our local football. And for the first time, the Accra Sports Stadium was full to its capacity in Hearts of Oak game against Asante Kotoko.

Japanese citizens in the country started following the club and were always at the stadium anytime Hearts of Oak is playing a home match. In the first half of the league, Kenichi and his charges were on top of the league log but dropped to the fourth position. However, reports started emerging that there is a rift between the management of the club and the trainer.

Kenichi, in an interview with Accra based Asempa FM, confirmed that he does not understand why the management of the club want him to leave but refused to speak about why they want him to leave. Despite the beautiful football exhibited by the players, the management of the club handed the Japanese trainer a dismissal letter in June 2016 without any proper communication to the supporters of the club. Surprisingly, no coach has been able to surpass the number of Kenichi Yatsuhashi since hist exit and the club is trophyless for the past nine years.

Check out the list coaches have sacked in the last decade.

Despite hiring twenty coaches, the club have failed to end their trophyless jinx. Hearts of Oak board must know that it not about the number of coaches will you will hire but the plans, aims and ambition you have as a club will make you successful.

It is embarrassing that such a big a club always sack coaches in the middle of the season and turn to name assistant coach on an interim basis but keeps on sinking as a club.

Reports suggest that Hearts of Oak are in talks with Tunisian coach Tarek Jani to take over the club. Now, the question is, does he know the philosophy of the club? Is he aware of the demands of the supporters and how to cope with the pressure in the Ghana Premier League? Will the supporters understand when he fails to reap the desired results?

Should the board and the management of Hearts of Oak fail to set a long term plan for the club and bring in a coach for the long term, nothing better will come out of the club.

Togbe Afede XIV, who is the majority shareholder of the must wake up and do the right for the club. Hearts of Oak cannot remain like this. When Hearts of Oak is a better position, we know the benefits it brings to our local football.

The bones will rot if proper plans and measures are not put in place by the hierarchy of the club.

Modern Ghana Quote Reports
Catch up with all the political quotes from our politicians.
Sponsored
More Opinion
Modern Ghana Links
What at all is wrong with Accra Hearts of Oak?
How Akufo-Addo-led government impacted Ghana Sports by creating sports facilities while transforming existing ones
The footballer raped and murdered for being a lesbian
FEATURE: Stepping into the big shoes of their fathers, meet talented Jacob Kingston and Rodney Appiah
My Jerry John Rawlings’ experiences: How fleeting this life here on earth…
FEATURE: How Gladson Awako turned around his career
Hon. Mustapha Ussif: The Consummate Administrator who has won President Akufo-Addo’s trust to lead his 2nd term sports agenda
Why Lampard must be given time at Chelsea
Jerome Otchere writes: Kotoko: Confronting the bitter truth
Quote Reports Dossiers
TOP STORIES

Manual on COVID-19 vaccination being developed for public se...
4 hours ago