Who Rules Bukom? - Accra Mayor Cup At Stake In Year Of Return Tug Of War At Bukom 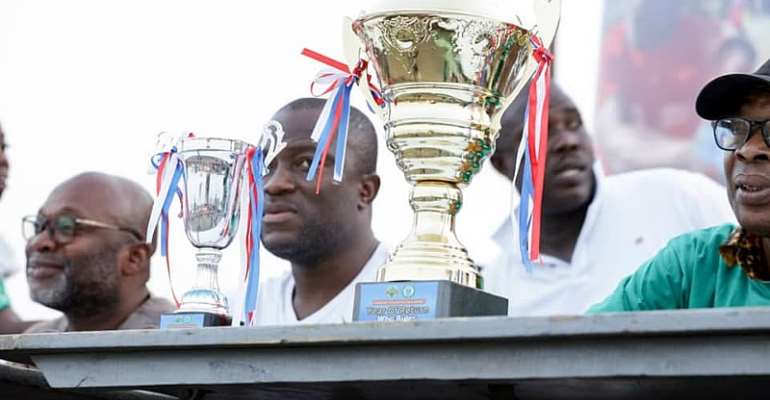 Four teams from Ga Mashie have qualified for the semi-final of the exciting Coastal Strength Challenge (Tug of War) – Year of Return Edition which was held at the Bukom Square on Sunday, December 29, 2019.

The semis and grand final are slated for next Sunday, January 5, 2020, at 4pm when the strong lads from Nleshie Alata, Akanmadzen, Bukom and Abola are going the pitch their strength and stamina against each other.

The Mayor of Accra, Hon. Mohammed Adjei Sowah who has placed a trophy at stake for the ultimate winner believes Ghana can shine in other traditional sports disciplines that could make people employed, occupied and happy.

After watching the exciting prelims of the Coastal Strength Challenge (Tug of War) – Year of Return Edition at the Bukom Square, he commended all the teams including Sempe, Gbese, Otublohum and Asere who lost in the first round.

He praised the contestants for their spirit, unity and strength plus energy in pulling and appealed for more competitions in various communities to create entertainment and development.

He expressed that sports can be used to educate the people on social hygiene and sanitation to keep the environment clean.

He also hinted that Ghana should be able to organize traditional sports like Tug of War that can be completed at the next African Games to be held in Ghana in 2023.

The Mayor who was born and bred in the neighbourhood said there are vast talents in Bukom and the place is not only for boxing, but swimming, football, riding/cycling, weightlifting, hockey, basketball and others.

Saka Akwei, technical director at the National Sports Authority (NSA) urged the people to take part in sporting activities to live long and encourage them to join the Tug of War teams as it can be an opportunity to represent the nation and become an international star.

Emmanuel Olla Williams, CEO of Dreamland Sports Plus who doubles as youth coordinator of the Ghana Olympic Committee (GOC) who organized the event said there are fantastic prizes and the Mayor’s Cup for the winners and best-comported team.

The event ‘Who Rules Bukom?’ was sponsored by Freedom Beer by Kasapreko Ghana Ltd with support from the GOC, NSA and One on One Foundation.

#FixTheCountry campaign goes international with over 500,000...
33 minutes ago