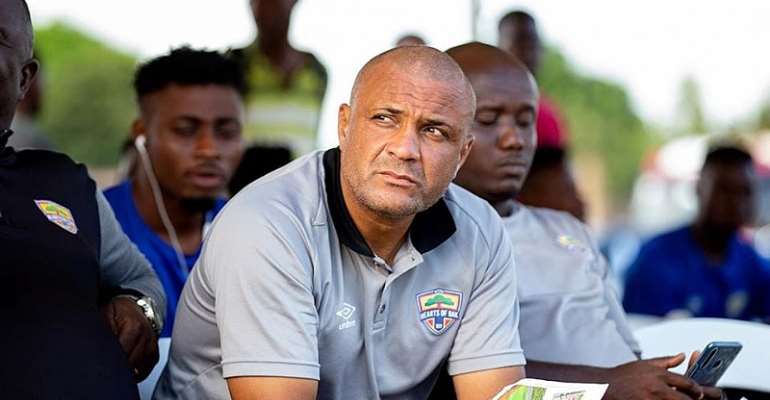 Coach Kim Grant has penned an emotional message on his Facebook wall to bid farewell to the entire Accra Hearts of Oak family after he was shown the exit door on Tuesday evening.

The former Black Stars striker was appointed as the first team head coach as well as Director of Football for the side in December 2018 during the era of American football administrator Mark Noonan as the Managing Director for the Phobians.

Having built a good team to perform outstandingly well in the Normalization Committee earlier this year, he was praised and tipped to eventually lead Hearts of Oak to glory when the Ghana Premier League returns.

Fast forward, Kim Grant has been axed today after his team lost its first match of the season against Berekum Chelsea on Sunday afternoon.

Right after the official announcement from Hearts of Oak on their decision to part ways with the coach, he has taken to his Facebook wall to wish the club all the best in their future endeavours.

His post read;
“Dear Phobians,
“I have now left my post as director of football and head coach of Accra Hearts of Oak and would like to thank you unconditionally for the amazing support throughout this last year.

“I only wish I was given time to bring success to this great club, which I know and believe I would have achieve the success you the supporters deserve.

“I wish all involved in the club future success and as one door closes another door opens.

“A happy and healthy new year to all.
“Phooooooooobia, Never Say Die until the bones are rotten!!!!!!!