‘Aguerooo-oh Wait!’ How VAR Could Have Altered The Decade’s Standout Moments 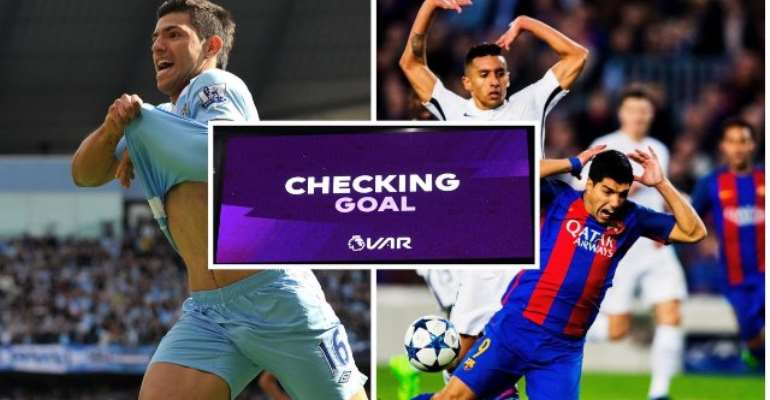 VAR is dominating the headlines after the final round of Premier League fixtures for the decade. Michael Hincks picks standout moments from the past 10 years which would have been altered had the technology been in place earlier…

Agueroooo-oh hang on a minute!
Over to Martin Tyler on commentary…
“It’s finished at Sunderland. Manchester United have done all they can. That Rooney goal was enough for the three points…

“Aguuerrrrooo-”
In steps VAR, and our hypothetical commentary…

“-oooooooh but wait! Referee Mike Dean has his finger to his ear. VAR is checking a possible foul in the build-up to the goal.” 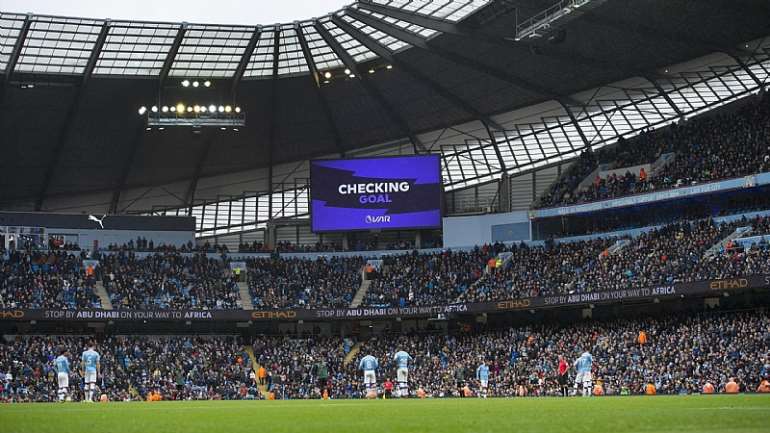 Checking goalGetty Images
Sergio Aguero puts his shirt back on. Joe Hart has stopped doing laps of the penalty area. The Etihad Stadium has fallen silent.

Did Mario Balotelli unfairly back into Anton Ferdinand and foul the defender before providing the assist?

The stadium grows nervous, the whistles get louder. But a decision is finally reached...

“The check is over. It’s NOT a foul. Manchester City are Premier League champions…” 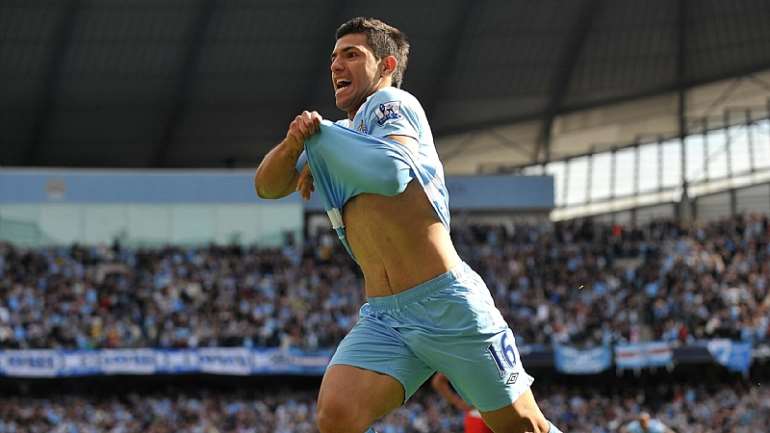 Sergio AgüeroGetty Images
Aguero whips his shirt back off, Hart bursts into a sprint once more, the City fans celebrate for the second time in a minute.

“Despite the delay, I swear you’ll never see anything like this again! So watch it! Drink it in!”

This scenario, arguably English football’s single standout moment of the decade, has been exaggerated for effect here, as of course Balotelli did not foul or come close to fouling Ferdinand.

Preventing fans from celebrating a goal to its fullest falls behind getting a decision correct in the importance stakes, but it remains a problem nevertheless.

With VAR in place, these golden moments may never be the same again, purely because the lingering doubt that the goal could be ruled out will hover over any celebration, no matter how certain it may initially appear.

It has been the case in tennis’ closing Grand Slam moments, with players dropping to the ground only to see the final point challenged by their opponent. Very rarely is the decision reversed, but it still takes the sheen off a memorable, potentially historical, occasion.

On that note, here are some other incidents which could/would have been changed by VAR…

Sergio Ramos bundled in the opener, which stood despite the defender being in a clear offside position for the goal.

Of course, Real may well have won whatever match may have played out, but it will have left Atletico wondering what if, with the club still chasing their first European Cup. 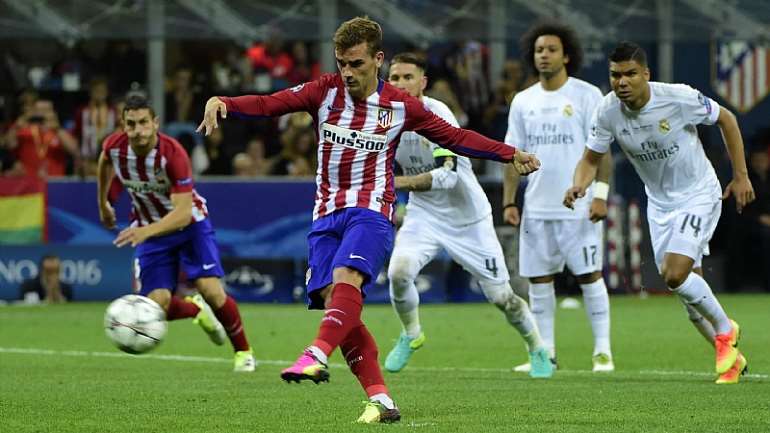 La Remontada: The comeback that might not have been

Barcelona were trailing PSG 4-0 going into their Champions League last-16 second leg meeting at the Nou Camp in 2016-17.

One of the all-time great comebacks saw Barca complete a stunning 6-1 win with two goals in injury time, but it might not have got to that point had decisions gone another way. 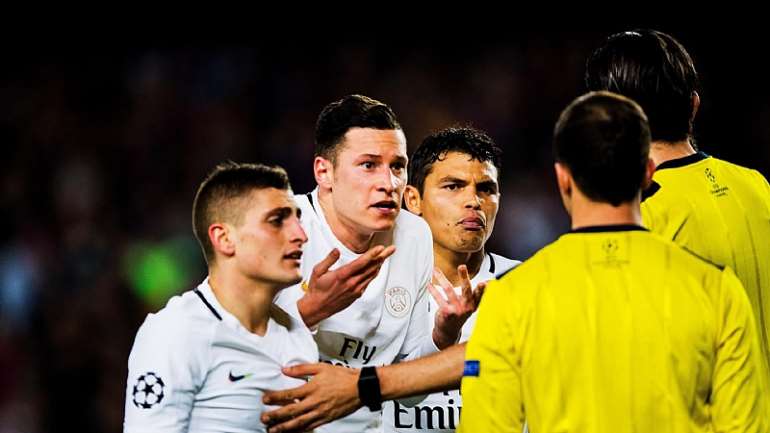 Luis Suarez went down under minimal contact before Neymar converted Barca’s fifth goal in the 91st minute, while Javier Mascherano’s last-ditch tackle on Angel Di Maria went unpunished. Both incidents may have gone the other way if checked again.

Mascherano later admitted it was a foul, but PSG were ultimately denied. Barca did not go on to lift the trophy, but it is regarded as one of the most thrilling Champions League matches, one which Neymar – now of PSG – referenced as his favourite football memory.

‘He’s a yard offside!’
A throwback to the very start of the decade, when Chelsea and Manchester United were battling it out for the 2009-10 Premier League title.

Chelsea travelled to Old Trafford a point behind United with six games to play, and ultimately leap-frogged the Red Devils with a 2-1 away win.

With 11 minutes remaining, Didier Drogba was a yard offside when putting Chelsea 2-0 up, and the Blues not only saw out the victory but went on to lift the title by a point.

It could well have altered little going forward in the 2010s but would have added another trophy to Sir Alex Ferguson’s jam-packed cabinet.

The English official dished out a record 14 yellow cards, with John Heitinga the only player sent off for two bookable offences in extra-time.

However, it may not have reached extra-time had Webb dismissed Nigel de Jong for his kung-fu-kick-tackle on Xabi Alonso. 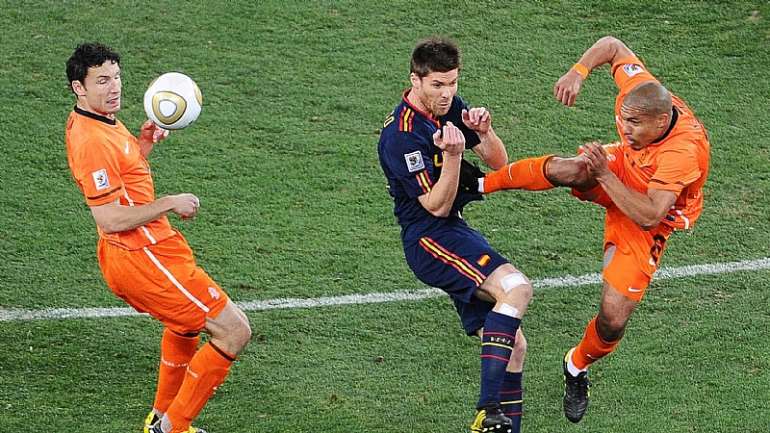 De Jong received just a yellow card for the incident in the 28th minute. Webb would likely have gone to the pitchside monitor to review the incident after the VAR questioned his initial decision.

With 11 against 10, Spain could have wrapped up their first World Cup win sooner, but the early red could have sparked a flurry of dismissals in what was the dirtiest World Cup final of all time.