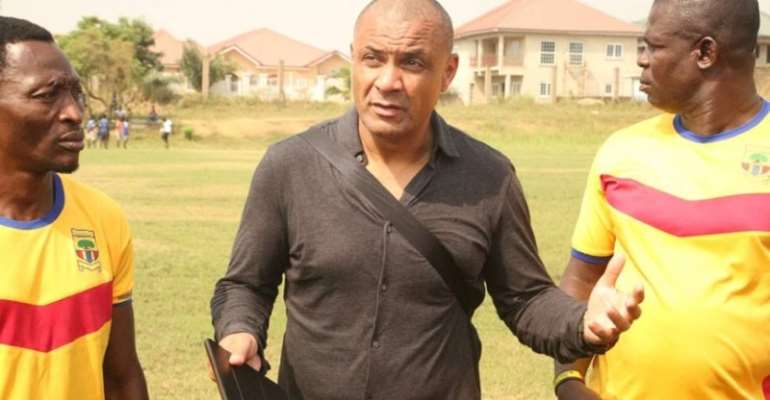 Ghana Premier League side Accra Hearts of Oak has debunked reports in the local media indicating that head coach Kim Grant has been sacked.

The formal Black Stars striker turned coach has been under fire in the last couple of weeks especially after the Phobians lost to sworn enemies Asante Kotoko in the 2019 President Cup.

To make matters worse, the Accra-based side suffered a shocking defeat at the hands of Berekum Chelsea on Match Week 1 of the Ghana Premier League on Sunday.

Subsequently today, there have been several reports in the local media insisting that the gaffer has been shown the exit door.

Speaking to Kumasi FM on the back of the report, Hearts of Oak's communications Director Opare Addo has noted that the coach is still in charge and will train with his players tomorrow.

"Kim Grant is still the head coach and will lead the team to training tomorrow morning at Pobiman", Opare Addo said.

He also added, "It was unfortunate that we lost our first match yesterday to Berekum Chelsea at home but we hope to work hard and improve on our performance going into our next game at Tarkwa to Medeama".