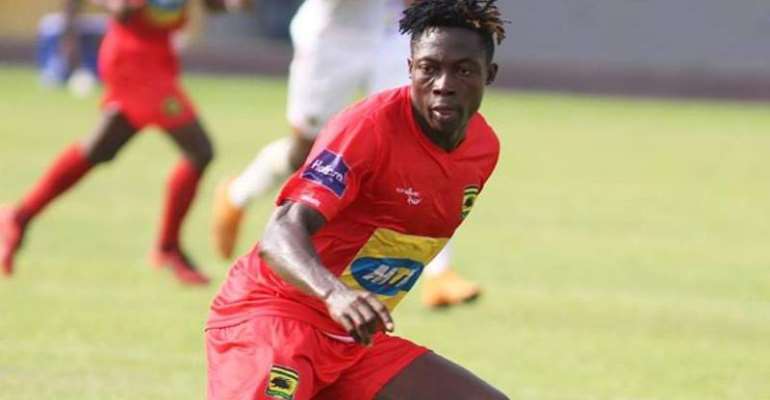 Medeama SC has celebrated on loan midfielder Justice Blay after he netted his first goal of the 2019/2020 Ghana Premier League (GPL) season to hand Asante Kotoko an important win against Techiman Eleven Wonders.

The Porcupine Warriors secured the services of the exciting midfielder from the Yellow and Mauves some three months ago on a year deal to help them in their continental campaign.

Though the side failed to make inroads in either the CAF Champions League or Confederations Cup, Blay has stayed on to serve the remaining months on his loan contract.

On the opening weekend of this season’s top-flight league, the midfielder was handed a starting role to help Asante Kotoko battle Techiman Eleven Wonders for the 3 points.

Justice Blay impressed for the Porcupine Warriors and scored the only goal that handed the team its first win of the season.

In a Twitter post today, Medeama SC has shared their delight for their midfielder for getting his first goal.

“In other news, we are happy to learn that our midfielder and huge asset Justice Blay scored the first goal of the 2019/20 Ghana Premier League season”, the post read.

It added, “He knows the drill. We will baptize him in Tarkwa when Asante Kotoko SC visits and take him back in June”.