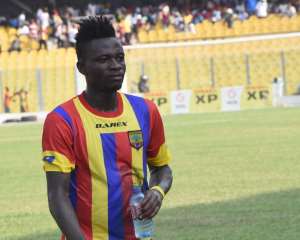 Captain for Accra Hearts of Oak, Fatawu Mohammed has expressed disappointment and sadness to his team’s 1-0 defeat at home to Berekum Chelsea in the Ghana Premier League.

The two clubs were in action on Sunday afternoon at the Accra Sports Stadium as the top-flight league made a return after over a year's absence.

In a crucial first game of the season, the Phobians were shocked at home as they were beaten by a goal to nil by the club from Berekum.

Speaking to journalists at the post-match press conference, the skipper for the losers Fatawu Mohammed admits it was a difficult match for him personally as he adds that the opening day defeat is very painful.

“I didn’t find the game easy because it has been a long time I get much playing time. It wasn’t easy but as time goes on it will adapt”, the full-back shared.

He continued, “I am very sad because first much defeat is very very painful but it is part of football so we have to focus on our next game and continue”.

Fatawu will be expected to be in action for Hearts of Oak when they take on Medeama SC on Match Week 2.