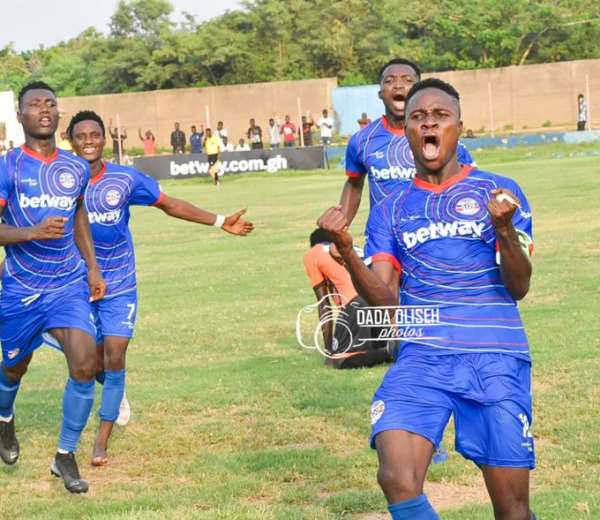 After one year's break, the Ghana Premier League made a return, throwing up some interesting results across nine matches centres.

The top-flight had been away since the suspension of the 2017-18 championship halfway through the season and subsequently annulled due to a bribery and match-fixing scandal.

The comeback of the league ends an 18-month absence. Also, unlike previous seasons, the new campaign features 18 teams.

Asante Kotoko, the most successful team in the history of the competition with 23 titles, got their campaign off to a good start by a 1-0 home triumph over Eleven Wonders at Kumasi's Baba Yara Sports Stadium.

Midfielder Justice Blay registered the only goal under two minutes, a strike which stands as the first goal of the 2019-20 championship.

Hearts of Oak, on the other hand, took off on a poor note after a 1-0 home defeat to Berekum Chelsea at the Accra Sports Stadium. The 19-time champions were undone by a 34th minute Jonah Attuquaye effort.

Veteran striker Yahaya Mohammed was undoubtedly the star of the day as his hat-trick and a Justice Anane strike sealed a 4-0 home win for cup holders Aduana Stars over Inter Allies at the Nana Agyeman Badu Stadium in Dormaa.

There was another big result, this time at the Theatre of Dreams in Dawu, where Dreams FC handed new boys King Faisal a 4-1 defeat. Emmanuel Ocran (two), Issah Ibrahim and Dantani Amadu were on target for Dreams while Lateef Mohammed netted for Faisal.

Legon Cities FC, formerly known as Wa All Stars, surrendered a two-goal lead to settle for a 2-2 away draw with Liberty Professionals at the Karl Reindorf Park in Dansoman.

Wafa stunned Karela United away at Akoon Park in Tarkwa as Forson Amankwah's goal on the hour-mark secured a 1-0 win.

There was another win on the road, this time at the Cape Coast Sports Stadium, where Medeama beat Ebusua Dwarfs 3-1 courtesy of goals from Ebenezer Ackahby, Prince Opoku Agyemang and Nana Kofi Babil. Albert Gaisie scored Dwarfs' consolation from the spot.

In the last game, Bechem United picked up a 2-0 home win over Elmina Sharks, owing to goals from Kwadwo Asamoah and Prince Adu Kwabena.