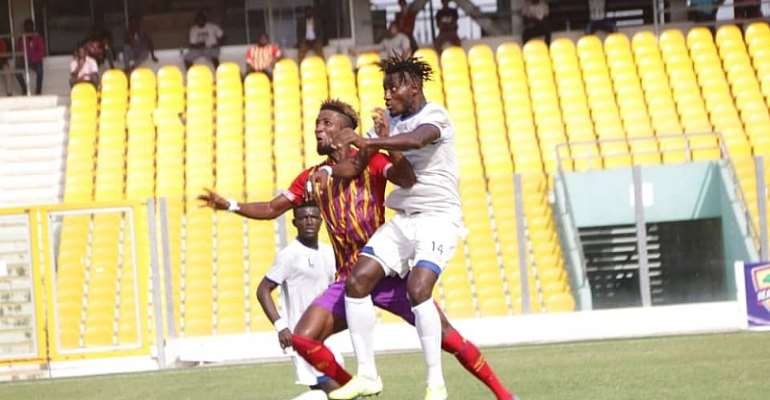 The Phobians went into the game in high spirits as they hoped for a win to jet off to a good start. They were however surprised by the visitors who posed threats from all departments of the field.

As expected the home side controlled the match with their possessive play against their opponent who was happy to defend and attack whenever the opportunity presented itself.

A little after ten minutes, Berekum Chelsea goalkeeper Danlad Ibrahim pulled off a good save to deny Joseph Esso from shooting Hearts of Oak into the lead.

From there on, the game dragged a bit until the 34th minute when Jonah Attuquaye curled a fine shot past Phobia goalkeeper Richmond Ayi and into the back of the net.

That equalizer sent the away team into the break looking like the side that will eventually run away with 3 points.

In the second half, manager Kim Grant made some changes in hopes of getting his team back into the game. Striker Kofi Kordzi who was introduced posed a great deal of threat and even saw one of his efforts rattling the crossbar with ten minutes to end proceedings.

Berekum Chelsea remained resilient and emerged as 1-0 victors at the end of the 90 minutes, upsetting the Ghana Premier League giant on the opening weekend of the 2019/2020 season.