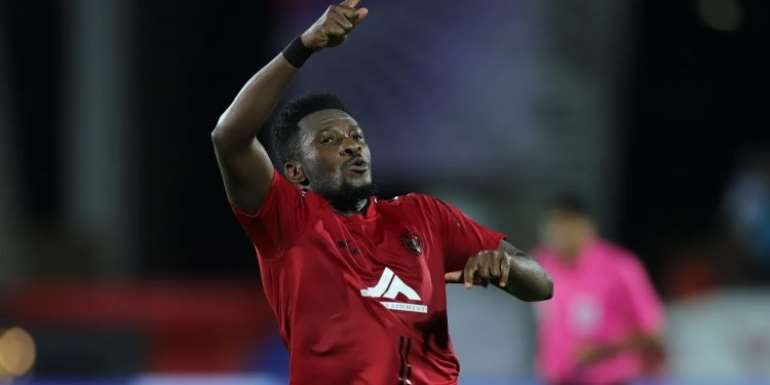 Veteran Ghanaian striker Asamoah Gyan was in action for NorthEast United this afternoon and ended the day with a vital equalizer that helped his side to draw 1-1 with Kerala Blasters in the Indian Super League (ISL).

The forward has battled with minor injuries since the start of the 2019/2020 season in the Asian country. He was recently sidelined for a week before making a quick recovery.

In a match week 10 encounter against Kerala Blasters at the Jawaharlal Nehru Stadium today, the fit-again Asamoah Gyan was handed a starting role to help NorthEast United fight for 3 points.

The home team played well and ended up taking the lead on the 43rd minute when Bartholomew Ogbeche found the back of the net. That strike was enough to send Kerala into the first half break with a deserved lead.

However, five minutes into the second half, NorthEast United was awarded a penalty and a chance to draw level. The experienced Gyan stepped up and expertly converted to bring the scoreline to one-all.

Despite several attempts to get the winning goal, neither side could get on the scoresheet again as the match eventually ended in a draw.

The Black Stars legend now has four goals and one assist to his name after making 8 appearances for his club in the Indian Super League.